Modern Family at Disneyland – Another Preview and a Parental Warning 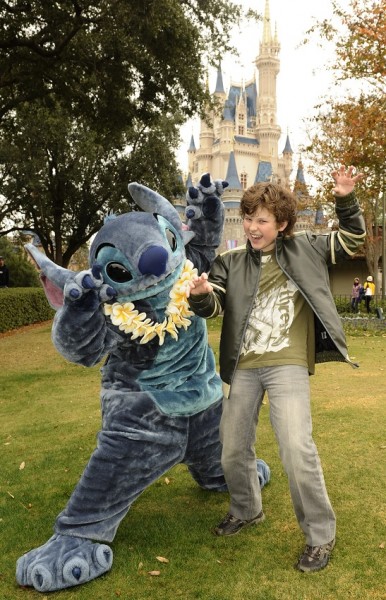 Disney has released another short clip from the special episode of ABC’s Modern Family filmed at Disneyland.

That clip exemplifies Modern Family’s humor for me. Based on circumstances anyone could find themselves in, just handled with the usual flair of the Pritchett-Dunphy-Tucker clan. Apparently another clip was previewed on America’s Funniest Videos, I did not see that, but a reader did and felt a need to send a warning to parents who might let their impressionable youngsters watch the show::

I’m disappointed with this episode of Modern Family because the preview of the episode that aired during America’s Funniest Home Videos (AFV) last night exposed the “magic” of Disney characters to my 5 year old son. The plot goes that Haley’s boyfriend has returned to town and is now performing as a walk around character at Disneyland (Little John from Robin Hood). In the preview shown during AFV, the character is shown in Frontierland arguing with Haley through his costume and she pushes him to the ground. My son exclaimed “You mean they are just costumes?! Those are people inside suits?!” What were we to say? What was Disney thinking in using this plot line and, more importantly featuring this particular clip on AFV – a show with a large audience of children that airs at 7pm on Sunday night? He’s gearing up for his 15th Disney family vacation in 5 years for the opening of Carsland in June and we’re sad that this will be the first trip where he no longer believes in the Disney characters due to this Modern Family storyline promo’d on AFV.

In the scheme of things, spoiling the magic of walk around characters at Disneyland may seem trivial to you, however, you may want to use your own judgement if your kids still believe.

Ps, I know that photo is from Disney World, but I had it online already. :)