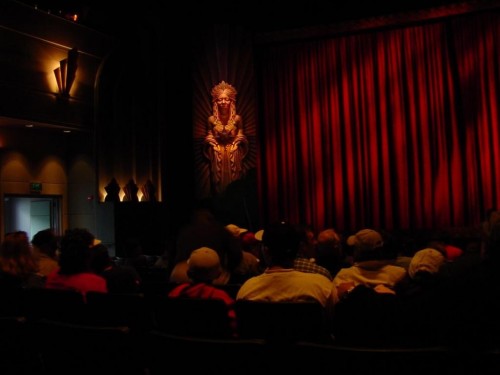 Many rumors stated that the original production would have been a more elaborate version, more along the lines of “The American Adventure” at Epcot. Sadly, those things called budgets come along and ruin all the fun. There was a miniscule piece of controversy about the ride at the beginning. Some thought the choice to make the two Chinese railroad workers “explode” was a little too intense for a theme park attraction. Measures were taken and the movie returned after a brief refurb with a less intense sequence, but implying the same outcome. Other than that, the movie was fine and dandy. It ran for 8 years, finally closing in March of 2009. In 2011, “The Little Mermaid: Ariel’s Undersea Adventure” took its place, with the rotunda still remaining, just with a new paint job. Personally, I loved the movie and I would have loved to have seen it remain, but I understand why it was removed.

Was this your favorite movie? Do you want Whoopi back in the parks? Do you get the Apple pun? Let me know in the comments below! I leave you with a video of the final showing of Golden Dreams…EVER! (I made that more intense than it needed to be…)

Next week, we cover the multitude of restaurants that have gone the way of the Dodo bird. Until next week… “You keep those dreams alive.” Have a Magical Day.

P.S. Ma’am, you forgot your bag

(Photos courtesy of the wonderful Laughingplace.com)