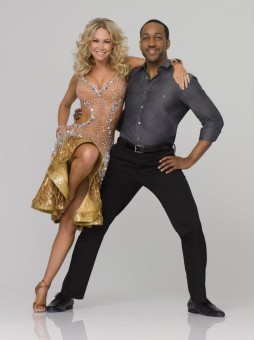 The results show began with Maria and Derek performing an encore of their perfect-scoring paso doble. Katherine and Mark, Donald and Peta, and William and Cheryl were put out of their misery early and declared safe. After an extremely emotional AT&T Spotlight Performance, Gavin DeGraw returned to the ballroom. This time, however, it was to sing his new song while Karina and Louis danced along.

The Ballroom Battle, which has been mostly featured on abc.com, concluded last night. Cheryl, Tony, and Louis each coached one amateur couple. After watching the three couples jive, the judges proclaimed Cheryl’s team the winners.

More results came when this week’s leaders, Maria and Derek learned they were safe, but Roshon and Chelsie found out they were in the bottom two. Last place Melissa and Maks were shocked to hear they were safe, which left Jaleel and Kym to rumba in the final dance duel of the season. My favorite part of the night came when Jaleel called Len the old guy outside the grocery store who won’t give a kid any money for candy.

Both pairs did an excellent job in their dueling rumbas. Carrie Ann said it was not an easy choice, Len was broken-hearted that they had to send one couple home, and Bruno thought they both did great. The judges unanimously decided to save Roshon and Chelsie, which put an end to Jaleel’s quest for the mirrorball trophy. He made some very sweet remarks before taking the dance floor for one last time.

Next week two couples will be sent home. Yikes! See you back here!