The Classics…and Lady Gaga, Dancing With the Stars Week 7 Recap 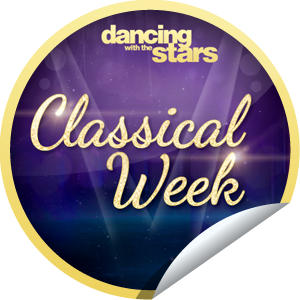 Classical night made for an elegant evening in the ballroom. We finally saw a team score a perfect 30! Here’s how it went…

Maria and Derek’s dramatic vampire-themed paso doble electrified the dance floor. Carrie Ann said it didn’t suck (get the vampire humor?). For the first time this season, we saw three judges raise their “10” paddles. Congratulations on the 30, you guys!

Three couples scored 27 with their individual dances. Katherine and Mark (9, 9, 9) wore very cool costumes (or in Mark’s case, half a costume) for their rumba. Carrie Ann thinks Katherine is technically unmatched in the competition, although she wanted to see more genuine heat between the two. This week, William and Cheryl (9, 9, 9) wowed the ballroom with a moving Viennese waltz. Carrie Ann said they brought romance to life. Donald and Peta (9, 9, 9) received a standing ovation for their Viennese waltz. The judges were all pleased, with Len calling it terrific.

Roshon and Chelsie were on a mission to avoid the bottom two with their Argentine tango to classic Lady Gaga. Wait. What? Len and Bruno praised their seamless lifts. Even though Len and Bruno said Roshon needed more strength in his legs, Carrie Ann was impressed by the caliber of his performance. Scores of 9, 8, 8 gave the pair a 25.

Jaleel and Kym danced a pleasing Viennese waltz. Len liked the floaty feel of the routine, but thought the footwork just wasn’t there. While they were slightly disheartened  by their score of 24 (8, 8, 8), the couple was excited to attack the team dance.

Melissa and Maks danced the Argentine tango, complete with several ambitious lifts. While the audience loved it, Bruno thought it got messy at times, and Carrie Ann said they should have gone for quality rather than quantity with their lifts. Ouch. Triple 7s gave them a disappointing total of 21, the lowest of the night.

This season’s first team dance was brought to us by Team Tango (Katherine, Maria, Roshon, and Jaleel) storming the dance floor. Len thought Maria and Roshon were the standouts. Bruno praised the choreography. Scores of 10, 9, 8 totaled 27 for the team, which was added to each couple’s individual score.

Team Paso’s (William , Melissa, and Donald) fiery performance was spectacular. Bruno called them superheroes, and Carrie Ann said it will go down in history as the fan favorite paso doble. The judges’ total score of 26 (9, 8, 9) elicited loud boos from the audience, and I was booing from my couch! I’ll admit the team wasn’t technically perfect, but it was super-enjoyable to watch.

Another week of dances is now in the archives. Who will wind up in the dance duel? Will this week’s low scoring couple, Melissa and Maks, be eliminated? I’ll be watching tonight!