Pixar’s Brave looks better with every little bit of information that’s released. Today it’s a new still from the movie featuring Merida, a lurking bear, and a mysterious blue light. 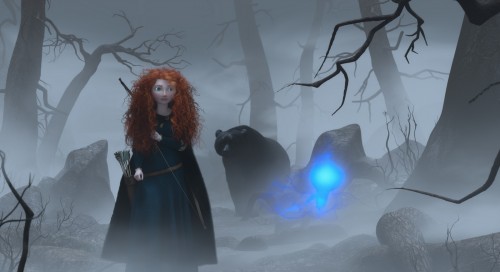 If you remember a few days ago we looked at the international marketing for Pixar’s Brave. Turns out a new Japanese poster has been released. It contains what may be our first glimpse of the eccentric Witch from the film. Since that’s a spoiler, I’ve placed it and the official movie synopsis below the jump: 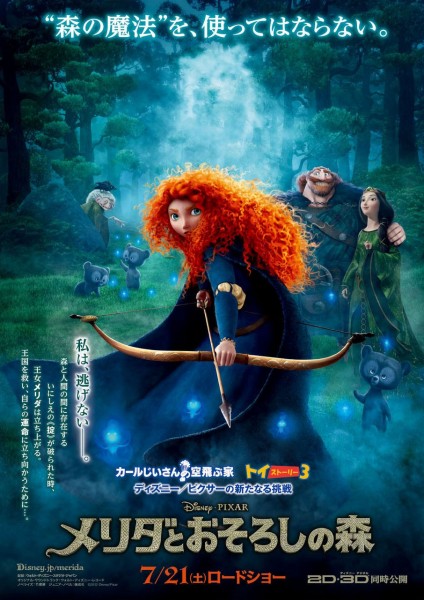 Since ancient times, stories of epic battles and mystical legends have been passed through the generations across the rugged and mysterious Highlands of Scotland. From Disney and Pixar, a new tale joins the lore when the courageous Merida (voice of Kelly Macdonald) confronts tradition and challenges destiny to change her fate.

“Brave” follows the heroic journey of Merida, a skilled archer and headstrong daughter of King Fergus (voice of Billy Connolly) and Queen Elinor (voice of Emma Thompson). Determined to carve her own path in life, Merida defies an age-old custom sacred to the unruly and uproarious lords of the land: massive Lord MacGuffin (voice of Kevin McKidd), surly Lord Macintosh (voice of Craig Ferguson) and cantankerous Lord Dingwall (voice of Robbie Coltrane). Merida’s actions inadvertently unleash chaos and fury in the kingdom, and when she turns to an eccentric Witch (voice of Julie Walters) for help, she is granted an ill-fated wish. The ensuing peril forces Merida to harness all of her skills and resources – including her clever and mischievous triplet brothers – to undo a beastly curse before it’s too late, discovering the meaning of true bravery.

Directed by Mark Andrews and Brenda Chapman, and produced by Katherine Sarafian, “Brave” is a grand adventure full of heart, memorable characters and signature Pixar humor that audiences of all ages around the world have come to eagerly expect. The film takes aim at theaters on June 22, 2012, and will be presented in Disney Digital 3D™ in select theaters.