Shaking Things Up, Dancing With the Stars Week 5 Recap 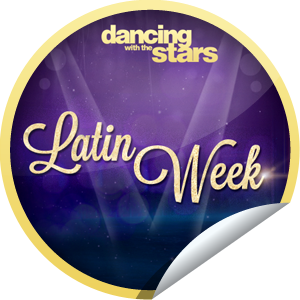 It’s Latin week you guys, my favorite of the season! I love watching all those shaking, um…sequins. Wink, wink. The ballroom got into the spirit when Santana opened the show.

The top score of the night, 29 (10, 9, 10), went to two couples. Katherine and Mark succeeded in reclaiming their former position at the top of the leader board with their Argentine tango. Even though Katherine injured Mark’s “naughty bits” (snort laugh) in rehearsal, the pair delivered a dance that the judges raved about. William and Cheryl smoldered in their intense Argentine tango. After taking a moment to collect herself, Carrie Ann called William a “Latin-dancing James Bond.” Right on.

Two couples earned a total score of 27. Despite suffering another injury (prompting her to wrap herself in bubble wrap during rehearsal) Maria and Derek’s salsa SIZZLED. And this time, there was no doubt…they definitely kissed. The judges gave them triple 9s. Donald and Peta’s sexy Argentine tango contained a series of spectacular lifts. The judges didn’t come to a consensus on this dance, awarding them 10, 8, 9.

After last week’s brush with elimination, Roshon and Chelsie were determined to step things up with a salsa. Roshon took some tips on being sexy from William. Bruno was very impressed with Roshon’s energy and timing. The judges showed their approval with scores of 9, 8, 9 for a total of 26.

Jaleel and Kym attacked the samba. While I was slightly uncomfortable watching Urkel shaking his business, Len got to his feet (!!!) to praise Jaleel’s hip action. Triple 8s gave them a score of 24.

Gladys and Tristan pleased the crowd with their samba. Len called it simple but effective, and Carrie Ann said Gladys commanded the stage, despite a few errors. Scores of 7, 7, 8 totaled 22.

Melissa and Maks (whose spray tan was in overdrive) danced a salsa. Carrie Ann praised Melissa’s new self-confidence, but agreed with Bruno that she sometimes lacked control. Triple 7s from the judges gave the pair a 21.

Gavin and Karina looked like they were having fun with their samba. Carrie Ann loved Gavin’s joyfulness, but Len called it a “shamba.” Ouch. Scores of 6, 6, 7 gave them 19, the lowest score of the night.

Nine couples remain in the quest for the coveted mirror ball trophy. Will there be another shocking elimination tonight? See you back here after the dance duel and results!