Voice of Liberty soon to ring out at Disneyland 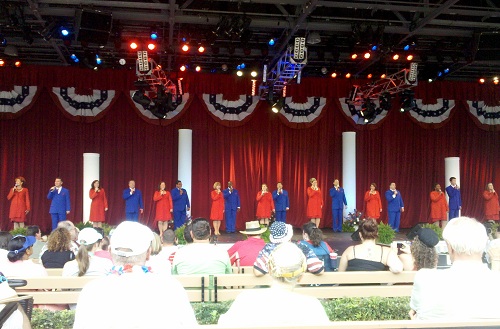 In what is perhaps the biggest “What took them so long?” moment of the decade, Disney has decided to position a version of its 8-part a capella group “Voices of Liberty” at Disneyland. This prestigious group calls the rotunda of EPCOT’s American Pavilion home and has wowed millions of guests over the years with their patriotic numbers and wide range of vocal stylings.

The Voices of Liberty also serve as Walt Disney World’s go-to performers when it comes to events like Candlelight Processional, national anthems, and other official events. As they’re located not too far from Hollywood and a fairly vibrant community theater scene in Orange County, Disneyland has never had a problem attracting performing talent, the problem has been keeping them as the good ones frequently leave to go on national tours, other theme parks that pay more, or sometimes Broadway (Eden Espinosa comes to mind). By being able to offer a role in Voice of Liberty, Disneyland might be able to retain a bit more of that talent, which will only be a good thing for the park.

Apparently they’ll be performing in the lobby of Great Moments With Mr. Lincoln, which doesn’t have the rich acoustic properties of the rotunda dome in the American Pavilion at EPCOT, but has the same gravitas. I look forward to seeing the first video appear on YouTube.