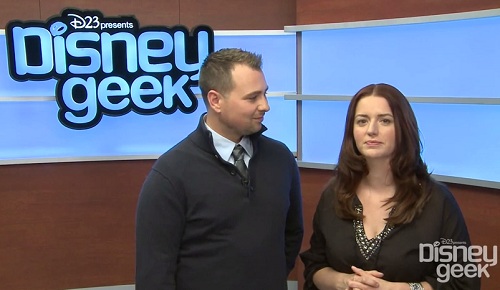 For anyone unfamiliar, Disney Geek is a weekly video series from D23. The YouTube program covers “this week in Disney news” and serves as a great recap for anyone who wasn’t glued to WDWMagic or Twitter all week. The host, Jeffrey Epstein, was energized, informative, and most of all, geeky (true to the name of the series.) If you haven’t watched it before, here is an example.

However, after December 21st of last year, the series stopped. No warning was given to fans, and no explanation was given either. Fans commented on the last video with things like “why haven’t there been any more videos? or at least an update?” and “Where have you been?”

Yesterday, D23 released a new “Disney geek” with a new set, new hosts, and a new feeling. In my opinion, there is no comparison. One comment compared it to “Entertainment Tonight” in front of a green screen with paid actors, as opposed to Jeffrey, who hosted the show from his desk FILLED with Disney memorabilia and merchandise. Here’s a look at what the show is now:

Immediately, fans were noticeably upset. I tracked the views, comments, likes, and ratings of the video for the first few hours of it being posted.

@DisneyD23 not a fan of the new setup. Hosts look/sound bored

@DisneyD23 where is Jeffrey?We have met him at D23 events and adore him.

Commenting on the video…

And even discussing it on Disney message boards.

To boot, a majority of the ratings on the video itself were “thumbs down” whereas the other Disney Geek videos have positive ratings.

This morning, the scene looked a little different. A few comments appeared praising Billy (one of the new hosts) but completely ignoring the other host, or the other comments. They also all referenced Jeffrey’s “bitter friends” and “vindictive clique.”

They even made homophobic comments about Jeffrey and his fans…

This reminds me of kids in elementary school who would pick on other people, but ultimately they were insecure themselves and just unleashing that on others. The fact that the (very few) positive comments were ALL about “No guys, Billy is GREAT! Don’t listen to Jeffrey’s friends!” leads me to believe that these comments were actually from Billy’s friends coming to his defense.

They even started marking negative comments as spam in an attempt to hide them. They were successful in that matter – the top comments, which were negative, have over 30 thumbs up, but have been hidden as spam. The top comments that now appear on the page (ones praising the change) only have 10 or less thumbs up. (Note to internet users, just because you disagree with a statement doesn’t make it spam.)

Homophobia and flaming aside, my biggest issue here is that Disney is quiet. I’d personally be alright with the change if they just told us WHY they did it. Instead, they left fans high and dry for the better part of five months, and then came back with a new series as if nothing had happened. Despite all the negative comments and tweets, D23 has yet to provide an explanation.