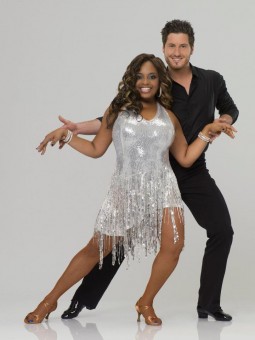 Kiss returned to rock the ballroom once more at the beginning of the results show. We learned that Melissa sustained a concussion at the performance show, and Gavin carried her through the studio to get medical attention. Was that swoon-worthy or what? Melissa took the evening off to recuperate, which is good since she and Maks will dance again next week. Gentlemanly Gavin and Karina also found out they were safe.

The judges chose Donald and Peta to perform the first encore dance of the season, and they again steamed up the dance floor with their paso doble. The second set of results revealed that Maria and Derek, Jaleel and Kym, and Gladys and Tristan were safe. Karina performed a spectacular Argentine tango accompanied by Gotan Project.

The highest scoring men heard their results next. Donald and Peta were safe, but Roshon and Chelsie were, surprisingly, in the bottom two. We were treated to a sneak peek at the new live Las Vegas show featuring dancing pros and celebrities from past seasons. It looks like a good time!

Katherine and Mark were ecstatic to find out they will return next week. William and Cheryl were also declared safe, which left an emotional Sherri and Val in the bottom two. Tom revealed that Sherri and Val were leaving the competition.

It was painful to watch Sherri break down. She was a bright spot in the ballroom, and will surely be missed. It would have been fun to see her shaking her stuff in Latin week next Monday. I’ll see you back here!