Cry Me a River, Dancing With the Stars Week 3 Recap 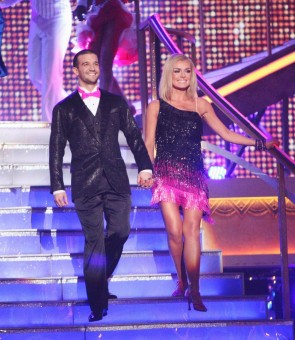 Last night’s show featured dances portraying a story from the most memorable years of the stars’ lives. I wore my waterproof mascara in preparation for the waterworks. That was a wise choice.

Katherine and Mark finished at the top of the leader board with a score of 29 for their highly emotional waltz in honor of Katherine’s deceased dad. They earned the first 10s of the season from Carrie Ann and Bruno, but Len gave them a 9 since he wanted to see more holds. William and Cheryl’s fiery and sexy salsa drove the audience wild. Len said he conquered the routine, which was inspired by William’s emigration from Cuba. Scores of  9, 9, 10 (Bruno loves William) landed the pair in second place with a 28. Carrie Ann was speechless after Maria and Derek’s smooth and sensual rumba to Madonna’s “Material Girl.” Bruno said he felt it, and the judges gave them triple 9s for 27 points.

Ronald and Peta danced a passionate rumba to explore how Ronald felt after losing a close friend. Carrie Ann was truly touched, and the couple earned 26 points (9, 8, 9). Roshon and Chelsie performed a samba inspired by Roshon’s admiration of Michael Jackson. Bruno seemed to be in awe, but Carrie Ann and Len didn’t think there was enough samba in the routine. Scores of 8, 8, 9 gave the pair a 25. Carrie Ann said Jaleel and Kym’s rumba put him back in the game, although Len and Bruno thought he was a little stiff. The judges awarded them 9, 8, 8 for a total of 25.

Five couples rounded out the leader board with a score of 24 (triple 8s). Len proclaimed Jack and Anna’s samba Jack’s best dance so far, and Carrie Ann wants to see more of him. The judges unanimously agreed that Gladys’ frame has improved since last week, and were quite pleased with her and Tristan’s foxtrot. Gavin and Karina performed a rumba inspired by Gavin’s family’s support of his career path. It gave Carrie Ann Gavin fever! The emotion in Sherri and Val’s rumba for Sherri’s miracle baby impressed the judges. Melissa and Maks’ jive showed the judges Melissa’s progress, and Len said she has officially entered the competition.

After such an emotionally charged evening, can the judges really send one of the stars home? Since the bottom of the leader board is so clogged, the audience’s votes might play a bigger role than usual in deciding who goes home at tonight’s elimination show. See you there!

5 thoughts on “Cry Me a River, Dancing With the Stars Week 3 Recap”

previousPosters from The Great Goofini
nextCastle 4-20: The Limey