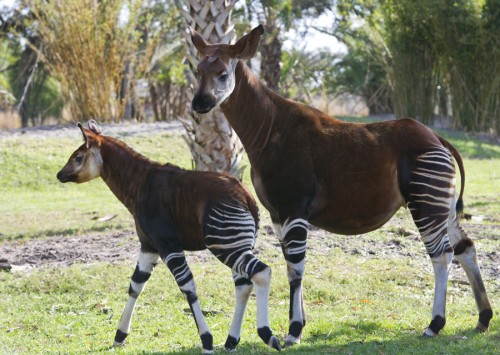 To my eye the Okapi looks like a composite of a giraffe, horse, and zebra. Sort of a living mythological creature. But no matter what you call it, a baby animal is almost always cute. The latest baby to hit the trails at Walt Disney World is this 5-month old female Okapi calf, seen here with its mother on the savannah at Disney’s Animal Kingdom Lodge Kidani Village.

The mother’s name is Zoe and the team named the calf “Makemba” (an African name that means “goddess”). Despite the stripes, the Okapi is a relative of the giraffe, not the zebra. Did you know, the Okapi’s tongue is long enough for the animal to wash its eyelids and clean its ears (inside and out).

The best part of the savannah at Disney’s Animal Kingdom Lodge and Kidani Village is that it’s free for anyone to stop by and explore.