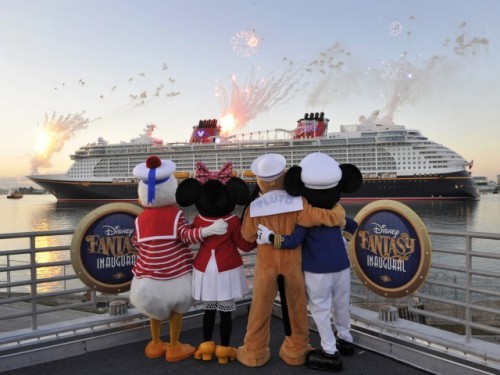 As you may have gathered, I’ve been invited to attend one of the upcoming media preview cruises aboard the Disney Fantasy. I’m quite excited. The preview cruise for the Disney Dream was only 2 nights, which added up to about 42 hours on board, of which I slept about 6 spending the rest of the time running around everywhere trying to discover everything on the ship to report here. This cruise has 3 nights and a full day at sea, so I should have plenty of time to explore and, hopefully, sleep at little bit.

If there is anything you want me to photograph or report on about the Disney Fantasy, let me know on this post and I’ll make every attempt to find it.

Meanwhile, join me below and we’ll discover some of the big waves the Disney Fantasy has been making as Central Florida readies for its newest resident. 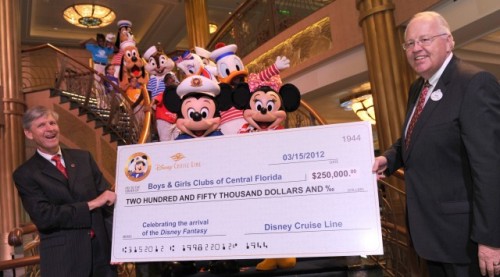 “Disney Cruise Line has been a long-time supporter of Boys & Girls Clubs of Central Florida,” said Holz. “As our fleet has expanded and our business has grown, it has been our pleasure to help the Clubs grow as well, so they can continue to inspire and empower young people. We are excited that this donation will assist in the development of a new facility close to our homeport, which will allow our crew members to continue supporting the Clubs through Disney VoluntEAR efforts.”

The contribution will help fund programs at Boys & Girls Clubs of Central Florida that teach children character and leadership, develop life and health skills and expand their creativity and cultural awareness through the arts. Both Disney and Boys & Girls Clubs share the same values in championing the happiness and well-being of children, as well as motivating them to make a lasting, positive change in the world. The relationship between Boys & Girls Clubs and The Walt Disney Company started more than 50 years ago when Walt Disney was made an honorary member of the organization’s national board of directors.

“We are proud to serve children at Clubs in Brevard County where there is a need  for comprehensive, dedicated youth development services and where all young people can come to realize their full potential as productive, responsible and caring citizens,” said Cain. “We are very grateful for this generous contribution from Disney Cruise Line, which will have an immediate impact on our community and encourage the next generation of local leaders. The opportunity to sail on the Disney Fantasy will create magical memories for these children and their families.”

In keeping with maritime tradition, Disney Cruise Line also hosted a plaque and key exchange with members of the port and community leaders commemorating the inaugural call of the Disney Fantasy on Port Canaveral.

Port Canaveral and the Central Florida region are experiencing sizable economic benefits with the addition of the Disney Fantasy. The ship’s arrival is expected to generate more than 500 jobs in the region in 2012, according to a study by Martin Associates released earlier this month.

“Not only is the arrival of the Disney Fantasy an important milestone for our business, it will also have a positive impact on the Central Florida community,” said Karl Holz, president of Disney Cruise Line. “With our fourth ship, we are able to generate more jobs and economic activity for the region while delivering even more cruising options for families to share unforgettable cruise experiences with us.”

To accommodate the expanded operation, new ships and increase in guest capacity, Disney Cruise Line worked with Port Canaveral to expand the dock area and terminal facility in early 2011. Along with the construction of a new parking structure and a sky bridge walkway, guests experience a state-of-the-art facility, making the transition from land to sea relatively seamless.

“We are excited to welcome the Disney Fantasy home,” said Port Canaveral Chief Executive Officer Stan Payne. “The arrival of the Disney Dream last year made a significant economic impact on Central Florida and we know the Disney Fantasy will add to that dramatically. We have seen our local businesses benefit when a ship of this magnitude and special Disney magic becomes part of our community.”

Beginning with its maiden voyage on March 31, the Disney Fantasy will embark on seven-night sailings, alternating between Eastern and Western Caribbean itineraries, with a stop at Castaway Cay, Disney’s own private island in The Bahamas.

With a tonnage of 130,000 and a guest capacity of up to 4,000, the Disney Fantasy is the second of two new, and significantly larger, ships that are being added to the Disney fleet. The Disney Dream arrived in early 2011 and is currently sailing three-, four- and five-night itineraries to the Bahamas, also from Port Canaveral.

Disney Cruise Line established the blue-print for family cruising when the business launched in 1998.  The first two ships, the Disney Magic and Disney Wonder, which were launched in 1998 and 1999, respectively, were purposely built for families to reconnect, adults to recharge and kids to immerse themselves in worlds of fantasy only Disney can create.

With the addition of the two new ships, Disney Cruise Line will celebrate 2012 with its most diverse sailing itineraries to date. New in 2012, the Disney Magic will offer eight-night cruises to the Bahamas and five-night cruises up the New England coast sailing from New York, and seven-night western Caribbean itineraries departing from Galveston, Texas. The Disney Wonder will continue sailing seven-night Mexican Riviera cruises from the Port of Los Angeles, while spending its second summer sailing Alaskan itineraries from Seattle.