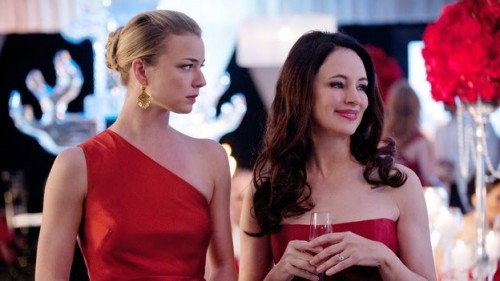 I don’t know about you but I’m still reeling Wednesday’s episode of Revenge. It had a lot to live up to. We’ve been subjected to 15 episodes of flashbacks (and flashbacks in those) just to be brought back to the Fire & Ice engagement party. The party where viewers were led to believe that Daniel Grayson would not survive his engagement shindig… literally. Could the writers be that cruel? Especially after we have grown to care about Daniel and realize our initial impression of him as the party animal/evil spawn of Grayson was completely wrong?

Well, after much speculation, and in the final minutes of this long-awaited conclusion, we can breathe a sigh of relief as we see that psycho Tyler is the one with the fatal gunshot wounds.

You would think Revenge’s entire story would make a bit more sense after this reveal, but, no, of course not. Instead, we are left with more questions than answers. Again.

So how did we get to this place? 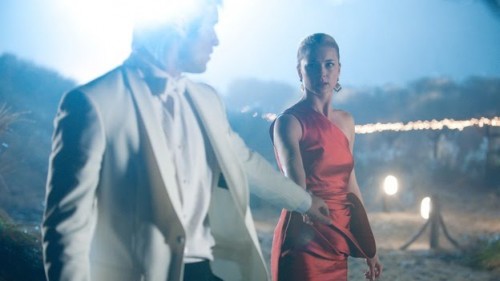 Tyler returns, his slicked back hair tucked under a baseball cap, hiding out in an old barn like John Wilkes Booth. He is the one who has stolen Emily’s box of secrets, and also taken Amanda as his prisoner. At first, Amanda is on Emily’s side, saying that it may look like she’s doing horrible things but she is doing them for the right reasons. But, however crazy Tyler may be, he’s pretty clear when he tells Amanda that she is her competition, not her friend. It doesn’t take long for Amanda to join Tyler’s team, especially when he whips out the text messages that she has never received from Jack and Emily’s box of secrets. So it’s basically two against one when Emily shows up with a big check for Tyler in exchange for her box. She doesn’t get the box back, and instead we get a clue. Tyler will be making some kind of appearance at the engagement party. “I hear there will be fireworks.”

Meanwhile, Gramps is really pushing for Daniel to step up at Grayson Global. Charlotte is beside herself about the news of her real father, and steals pills out of Declan’s medicine cabinet. I know I complained about wholesome Charlotte but the last thing we need is for her to become a drug addict. Declan (surprisingly) takes matters into his own hands and arranges for her to go to a therapy session, but Gramps squashes that idea because of what it could mean for Grayson Global’s reputation or Declan’s future at Charlotte’s school because, guess what, he failed the entrance exams. (Hey, at least that part is believable?)

And Jack decides it’s best for him to leave town and build churches in Haiti for a few months. (“No one is going to miss me.” I WILL. Emily tries to convince him that Amanda will come back when she is ready.) Most importantly, Sammy the dog is now officially Emily’s. But the best part had to be Nolan, urging Emily to just leave with Jack: “Go with him. Stay away. Fall in love. Make little volunteer babies.” Emily makes Nolan promise he will make sure Jack sails away safely.

Before the party, Daniel is meeting with our old friend Tekada, who has become nervous about his investment in Grayson Global. (Emily seems surprised he is back in the picture; Tekada also avoids one of her phone calls.) Daniel agrees with his apprehension and says he plans on taking Emily and jetting off to Paris to elope and live. As you can imagine, this makes Tekada’s ears perk up. (And mine too.) Back at Grayson paradise, Victoria has agreed to Conrad’s settlement of the deed to the manor and cashing in her shares of the company. (They both sign papers but I wouldn’t be surprised if something fishy is going on here.) Yet in her hand, she grips a business card for the Securities and Exchange Commission.

And finally the moment we’ve been waiting for. The party. Tekada’s gift is (miraculously) Emily’s secret box. He tells her to bury it far, far away so she goes to the beach (?) where she bumps into Daniel, who is dealing with the aftermath of a confrontation with his mother. He basically tells her he is done with her crap and divulges his plan to sweep Emily away to Paris. Victoria doesn’t believe Emily will just up and leave like that. The Grayson name is VERY important to her. She worked so hard the past 3 months to get in her current position. Just like Victoria did many years ago. Daniel doesn’t believe that Emily is anything like his mother.

See? This is what I don’t get. Daniel seems very confident in his relationship until this little chat with his mother. Because now he is brooding on a beach to be found my Emily. He tells her about his romantic Paris plans, and clearly, she is not into it. And quite quickly he believes what his mother said is true. She is in this marriage for other reasons. (This is why people should not get engaged after 3 months.) He walks away from her in a huff.

Back to the Tyler & Amanda crazy show. Tyler is dressed to the nines in a white tux. (Identical to Daniel’s. Hint! Hint!) Amanda doesn’t want to go and he threatens to shoot her if she doesn’t put on that gorgeous dress right now. (Tough choice.) She sneakily pummels him in the face. Tyler is injured, but still manages to shoot the gun and a bullet grazes Amanda’s head. She escapes all the way to Jack, who is on his boat. If this doesn’t scream Pacey & Joey Season 3 finale, I’m not sure what does. You can tell Amanda really feels for Jack but I wonder what would happen if she really told him the truth. She promises to never leave him again, and he tells her how Emily assured him she would be back to him someday. (Uh oh, doesn’t Amanda feel bad about turning her back on Emily now?) And then she escapes but not before Jack finds her blood on his hands.

Jack is on his way to the beach. Tyler is now on the beach confronting Daniel with a gun and a picture of Amanda’s Hamptons hit-list. “She was playing you brother; she’s been playing all of us.” Charlotte has taken some pills (Emily catches this) and her and Declan escape to the beach to skinny dip. Jack hears a gunshot. Fireworks are going off in the distance. He finds Amanda crouching next to a body on the beach. Jack seems to believe she shot him, she starts to say that she hasn’t, and Jack yells at her to go to his jeep. He drags the body. AND WE STILL DON’T SEE THE FACE.

Jack runs away when a cell phone starts ringing in the dead person’s pocket. Emily is calling. Amanda can’t find the keys to the jeep and a fancy looking car slides up next to her right on time. She asks for a ride. And a familiar voice – Mr. Tekada — agrees to take her where she needs to go.

On the beach, Charlotte is screaming. Everyone is running to the beach. Assuming it is Daniel. Victoria is screaming and crying. They turn over the body and it is Tyler. Not Daniel. I know I yelped, did you? A few seconds later, Daniel sneaks up from behind the dunes. Looking exhausted and covered in blood himself.

And now we have to wait 2 weeks for more answers.

In the beginning of the episode, we see there are 3 gunshots. The first one, and then two more but a person in black gloves. The same person who steals the hit-list picture that Tyler showed to Daniel. Speaking of Tyler, how much did he tell Daniel about Emily? If he did, will Daniel believe of that? Another tid-bit. I didn’t talk about Nolan a lot in this recap. He was there, sort of Emily’s right hand man once again. But it seems to me he has some sort of agreement going on with Tekada. They were sharing many secret glances and nods.

Revenge returns on Wednesday, February 29. Until then, catch up on the season at www.abc.com/revenge.