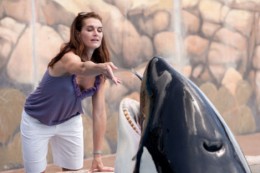 As we reported earlier this week, PETA had filed a lawsuit accusing SeaWorld’s Orlando and San Diego parks of treating its killer whales as slaves. We felt the lawsuit was ridiculous on its face. SeaWorld officials called the lawsuit frivolous. Now a Federal Court has ruled that it’s unconstitutional too. The result is a dismissal that both sides claim as a win. SeaWorld avoids a silly legal fight and PETA gets publicity for its cause.

More at the LA Times.