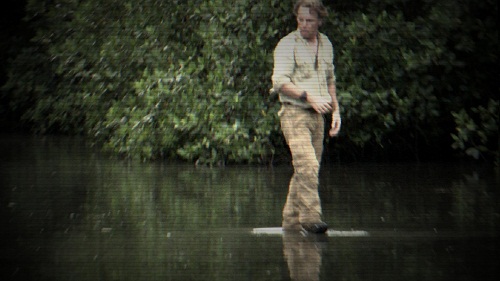 Tess, Dr. Cole’s wife, is captain of this crew, leading the search. In fact, she’s been the doctor’s captain and partner all along … until she had an affair. Based on their pained eye-conversations, we’re guessing she slept with Clark, the producer, who’s pretty much playing the “sleazy jerk” role here. He’s obsessed with getting shot, and he’s brought two cameraman along with him, A.J. and Jed, although only one of them makes it out of the episode alive.

Also along for the ride are sarcastic mechanic Emilio and his beautiful and mechanically-inclined daughter Jahel. Unfortunately, Jahel seems to know an awful lot about Corpo-seco (our evil ghostie) and she also spends a lot of time staring out into the distance with a haunted look on her face. She’s probably psychic. Oh, and the dead talk to her. Maybe.

Tess and Emmet’s son Lincoln is super cranky because his daddy was always too busy discovering awesome things to come to his birthday party. He has a serious chip on his shoulder, although he does display some leadership qualities toward the end of the episode, luring the Corpo-seco into its safety pod while Tess inexplicably tries to reason with it.

Oh yea, she does that. Corpo-seco has already killed a cameraman and destroyed the engines, but surely talking to it is the answer. She gets some scars for her trouble, but is unfortunately left standing at the end of the episode.

But back to Lincoln. Played by the weakest actor on the cast, Lincoln is studying to be a doctor, which is super convenient since people are getting hurt all over the place. He also had the episode’s stupidest line: “Science isn’t a great big wonder anymore. Discoveries are made in the lab, not in the jungle.” Tell that to these guys (who, granted, found those neat eyeless shrimp in the sea, but you catch my drift).

The only person Lincoln talks to without barking is Lena, the super-hot daughter of the cameraman who was with Dr. Cole when he went missing. She’s light and fluffy and seems to enjoy an extremely close relationship with Dr. Cole. The Corpo-seco cuts her when it escapes the ship the first time. That may be significant later. Or it might have just been a plot device so we could see that Lincoln isn’t a total jerk.

There’s really only one complete badie on this crew: Captain Kurt. He’s your typical meathead security type, although by the power of one of Dr. Cole’s hidden cameras, we learn that there’s a lot more to him than guns and ammo (although he does love that stuff). His secret? He has a satellite phone, and he’s not using it to check Facebook! He’s using it to check in with his employers, who want him to find out if Dr. Cole discovered “The Source.” Whatever that means.

Dr. Cole, for what it’s worth, left behind a series of videos which seem to imply that he’s either hooked on licking psychedelic tree frogs or he has learned how to tap into some kind of Amazonian magical powers. Hopefully, they’ll delve more deeply into the contents of these videos in future episodes because they look totally gruesome and way more interesting than watching Jahel adjust her grip on some rope.

And while we were spooked by the Corpo-seco, we were even more disgusted by the crew’s wonton attitudes about swimming in the filthy, disgusting rivers of Brazil. Sometimes with an open wound. We hear there are all kinds of insane parasites in the Amazon that will enter your body through any orifice. Gross. Stay out of the pool, kids.

All kidding aside, this isn’t must-see television, but it is a fun, spooky diversion. If this were the next Lost, the producers and ABC would have enough guts to allow all of this to unfold over two or three episodes, giving them the time to flesh out the characters and the audience the time to care about what happens to them.

So what’s next for our friends as they twist down that extremely long and winding river? Will the Americans ever figure out how to converse with their Brazilian hosts? Will we find out why Dr. Cole had so many (excessively many) hidden cameras on his boat? Will you keep watching The River? Tell us what you think in the comments below.

Miss the episode? Melissa’s recap have you intrigued? You can watch all of Episodes one online for free right now.