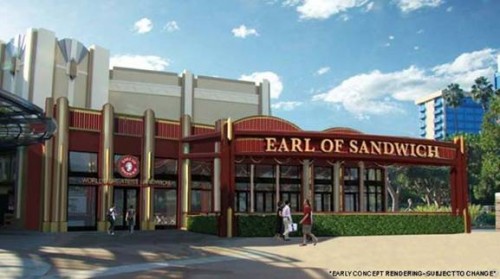 Being an Earl in England is not quite all it used to be, but having a name like Earl of Sandwich and being a descendant of the inventor of the sandwich, does give you some unusual brand equity. And so it was in 2004 that the latest Earl of Sandwich and his son (coincidentally named Orlando) opened up their first restaurant in Orlando at Downtown Disney. It’s been a terrific success and they now have 17 locations.

Disneyland Resort today announced that Earl of Sandwich will open a new location at Downtown Disney in early summer 2012. The restaurant will offer guests a unique, casual-quick dining option while visiting Downtown Disney. It looks like they’ll be moving into the current location of Compass Bookstore.

“We pride ourselves in giving our guests a unique experience at Downtown Disney through different retail and food offerings,” said Tony Bruno, vice president of Resort Hotels and Downtown Disney. “This will be the only Earl of Sandwich in California and it is sure to be a favorite among our guests as it has been at Walt Disney World for nearly eight years.”

The new restaurant, which continues to have historical ties to the inventor of the sandwich, the Sandwich family, will be adjacent to AMC Theatres. Signature hot sandwiches will be available including The Original 1762, a sandwich of freshly roasted beef, sharp cheddar and creamy horseradish sauce all on freshly baked artisan bread. Soups, salads, wraps and desserts also are on the menu. Earl of Sandwich offers a vast array of hot and cold beverages including The Earl’s Grey Lemonade. Breakfast sandwiches and pastries will be available in the morning and a variety of catering options will be offered at this location.

“We are looking forward to the grand opening of our newest location at the Disneyland Resort,” stated Robert Earl, chairman of Earl of Sandwich. “The success we’ve experienced at Walt Disney World, Disneyland Paris and our other 15 locations has proven that the quality of our food and our dining experience will bring guests back time and time again.”

The Orlando location is quite popular, often sporting lines out the door. Disneyland fans are in for a treat.

ABOUT EARL OF SANDWICH
In 1762, John Montagu, the 4th Earl of Sandwich, came up with the ingenious idea of putting meat between two slices of bread. Now, 250 years later, the current 11th Earl and the rest of the Sandwich family remain passionate about the world’s most popular quick food that carries their name. Joining forces with entrepreneur Robert Earl, the first Earl of Sandwich restaurant opened in Orlando, Fla. at Downtown Disney in 2004 and currently there are locations across the country. In late 2011, Earl of Sandwich opened new outlets in London, New York City and Paris. All Earl of Sandwich locations bake fresh artisan bread with every hot sandwich order and meats are roasted daily using traditional family recipes. Classic hot sandwiches are available, as well as soups, salads, wraps, desserts and a large selection of beverages. For more information www.earlofsandwichusa.com follow us on Twitter @earlofsandwich and like us on Facebook Earl of Sandwich.

6 thoughts on “Earl of Sandwich Soon to Grace Disneyland Resort”