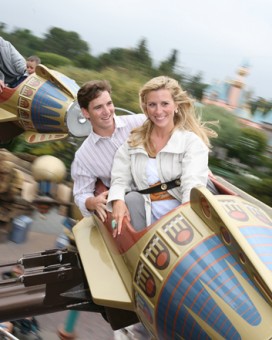 Eli Manning and Wife Abby McGrew at Disneyland in May 2008

The 2012 46th Super Bowl was eerily similar to the 2008 game, it featured an amazing acrobatic catch and the winning team is once again the New York Giants over the New England Patriots. Once again Eli Manning was voted Most Valuable Player, just as he was in 2008. And once again Manning recorded the famous ‘What Are You Going to Do Next’ commercial. Of course, there’s one event from 2008 we hope Manning does not recreate… missing his Disney Main Street victory parade.

The Disney Parks Blog notes that Eli Manning will be parading down Main Street USA at the Magic Kingdom in Walt Disney World on Monday, but in 2008 Manning decided he needed to stay in town and do some other engagements. So the parade float with Pop Warner stars went down the route with out him (see this sad photo on LaughingPlace). Manning finally made it to Disneyland in May and met with the youngsters, but it wasn’t cool to leave the Pop Warner football stars and all his fans hanging like he did in the first place.

Wouldn’t it be funny if everyone stayed home tomorrow so Eli Manning could get a dose of how it feels to be left hanging.