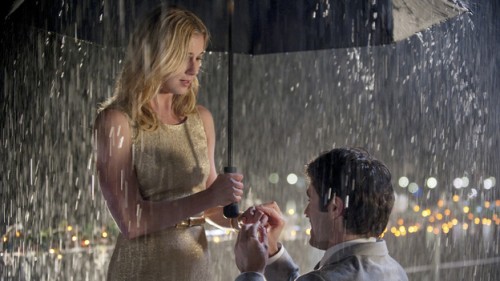 I don’t know about you but sometimes I need a few days to recuperate from an evening of Revenge. This episode was pretty much mind-blowing. I didn’t do any yelping but I could have used about five other brains to help me figure out what the heck was going on. It was pretty much drama overload this week.

First, I have to give props to Nolan in this episode. In the opening scenes he basically says all the things I’ve been thinking. Like, doesn’t Emily care that Charlotte is her half-sister? And who does she really love: Jack or Daniel (or in some weird way, both)? I guess I can’t blame Emily for being so detached when it comes to the Charlotte news since she’s upset her dad didn’t share the news with her in his journal and because she has built herself up to go through with this revenge plot and that didn’t mean making friends and going soft when anything personal happened.

Emily’s initial order of business this week is to find Amanda (who just returned from her romantic Pacey-&-Joey style getaway to Atlantic City). She informs Amanda of Treadwell’s house being set on fire and tells her she needs to get out of town. Victoria is clearly the one who set the fire and she hates Amanda so she is going to place the blame on Amanda of course. Amanda seems convinced she can get through anything and take care of Jack in the process. (Emily predicts Jack may be in danger.)

In the meantime, Conrad has offered Declan a “scholarship” to Charlotte’s school so they can be oh-so-happy together. Basically Declan has to just pass the entrance exam and it’s a go. I know I always make fun of Declan but it would be nice if he wasn’t such a stereotypical wrong-side-of-the-tracks kind of character. (Think about it: Joey Potter was created much in the same vein but she never once acted like this.) After Conrad’s no-strings-attached offer (yeah right), the David Clarke interview finds its way to his table. (Funny how that happens.) 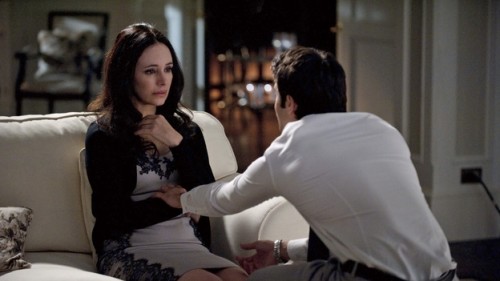 Conrad knows Charlotte isn’t his child. (Did anyone else find this interesting? I had the impression he was always trying to butter up Charlotte because he knew that he wasn’t her father? Now none of it makes sense. Instead he just wants the “best part award” over Victoria? Why doesn’t he work that hard on Daniel?) In search of answers, he decides to go through with a paternity test and steals a lock of Charlotte’s hair.

Lawyer Huntley is riled up with Victoria again because she didn’t tell him about Charlotte’s father. Victoria assumes that Amanda is involved in sharing the tapes with Conrad and invites her over. Some bizarre tea party with strawberries – that are a trick because Amanda was allergic to them as a child. (“I got over that!” our strangely sexual Amanda answers back.) She also eats some sort of condiment with a spoon, before leaving in a huff. “I don’t take orders from anyone!” Huntley takes the spoon and is going to use it for a DNA test.

Victoria and Conrad have a fiery private moment. He demands that she accept whatever he will give her to avoid a trial, or else everything will come out. Charlotte’s life will be over when everyone finds out her father is the biggest criminal in the world. Victoria refuses to back down. Conrad immediately writes off a shocked Charlotte and tells her she has to move back in with her mother. (Does this mean he’s not paying for Declan’s school anymore?)

Now the big romantic moment of the episode. (It was a bit over the top for me. I could have done without the string quartet.) Daniel proposes to Emily on a yacht. He calls her the “first person I could be my true self around.” Suddenly it’s pouring, he opens a large umbrella, and gets down on one knee. She says yes. (Anyone else notice it was the week of proposals on TV this week? At least for Glee viewers… and both included water?) Even if the proposal was pretty typical and unrealistic, the cherry on top was definitely Victoria’s face when they returned from the rain and she saw the ring. She looked like she was going to lose her freaking mind.

Back at the bar, after complaining about how she has shunned her best friend the entire summer and is going nowhere with her job (she overheard Conrad and Victoria talk about Charlotte), Ashley receives a text that Emily is engaged to Daniel. Jack looks…surprised. Amanda is getting hit on by some tough guy who comes out of nowhere. She manages to not make out with him, but informs him that she lives upstairs. Of course this guy becomes my biggest enemy because he beats the crap out of Jack when Jack catches him prowling around upstairs. The guy is up there to steal back the tapes that Emily planted upstairs earlier. So basically it’s Em’s fault that Jack is bloody on the floor.

We have a strange moment where lawyer Huntley is back and informs Victoria that Amanda and Charlotte are indeed related – which doesn’t make much sense. Because Charlotte should be related to our Emily… and then we find out – Huntley has been working for our Emily this whole time. Victoria discovers this before we have and fires him.

Now it’s making sense. Emily and Huntley meet under a dock where he says he’s out. He can’t be a part of this violence and maybe she should reevaluate what she is doing. Cut to a topless, injured Jack being bathed in sunlight like he is a savior. Does Emily realize how her actions have affected others yet?

Emily meets up with Amanda and tells her “everything”. Her father is innocent and she’s been trying to get the Graysons back this entire summer (and even longer). “You need to go save yourself and Jack.” Finally, a way to get Amanda out of the picture. Emily hands her a brand new identity, and writes Jack a note about her leaving. (Anyone else see the lone tape under the bed?)

While all of this is going on, Daniel has visited his dad to tell him about his engagement to Emily. Conrad gets a little emotional (after a scotch or three I’m sure). “I fell in love with Victoria and I fell hard.” But he alerts Daniel of the “secrets”. When Daniel confronts his mom about it later, she admits that Charlotte is David Clarke’s daughter and not Conrad’s. (Flashback of David and Victoria getting it on. Yay?) “All I wanted to do was protect Charlotte from the truth.” Victoria is crying. And Daniel deduces that… oh yea … David raped Victoria.

At the same time, Emily is having a heart-to-heart with Nolan on the beach. “Maybe the best way to level with Victoria is not marrying Daniel.” She needs to “press pause” and “regroup”. All the while her new rock is weighing down her hand. I have to admit this surprised me. Especially since if we all saw the first episode, we know she actually goes through with the engagement party which means she didn’t give the ring back.

And we find out why. Emily meets Daniel on her deck, where he explains that Victoria was raped by David Clarke, calling him a “mad man”. Suddenly Emily has a change of heart and you can already see the gears in her head turning. She proposes getting married in June, as Victoria watches from her perch.

Whoa. Whoa. Whoa. What an episode. We all know “the truth” of this last revelation so it should be interesting to see how it all plays out. Is Amanda really gone for good? Why exactly did Victoria ever get with Conrad to begin with? Are we going to discover more about their earlier relationship, and really, what does Emily have up her sleeve next?

Looks like we’ll find out when the show returns on February 8th.

(Sidenote: Liz Tigelaar, who created one of my favorite short-lived series called Life Unexpected, co-wrote this episode. In fact, when the episode aired, it had been exactly 2 years since LUX began and 1-year since it ended. I couldn’t help but wonder how Baze would propose to Cate when watching Daniel and Emily together. And it would most definitely not be on a yacht.)

Revenge is on ABC on Wednesday evenings at 10pm. To catch up on old episodes, please visit www.abc.com/revenge.