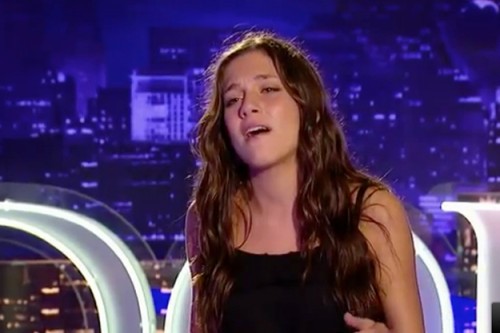 One of the very first contestants to win a ‘Dream Ticket’ at Disney’s American Idol Experience attraction in Disney’s Hollywood Studios, and the first to win singing a Disney song (Colors of the Wind from Pocahontas), is one of the early success stories of the new American Idol season. Tonight Gabi Carrubba sang “Sunday Morning” made popular by Adam Levine and impressed the judges winning her ticket to Hollywood.

When Carrubba won at American Idol Experience in February 2009, she was just 14 years old, too young to use that Dream Ticket. But she held on to it and was a big hit tonight with the judges who wondered where she had been hiding. Turns out, she was just biding her time, perfecting her performance skills. In fact, she’s been performing since she was a tot appearing in the stage production of Annie, including performances in the title role.

Aaron Kelly made it to the final 5 before he was voted out and so far that’s the farthest a Dream Ticket winner has gone. Looks like Carrubba has a good chance to go all the way. We certainly wish her well.

Ps, thanks to Pop Crush for the link to the old American Idol Experience page for Gabi! I knew I left that up for a reason.