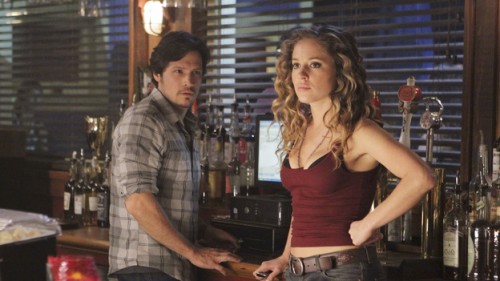 Revenge’s corner of the Hamptons is a bit quieter since Tyler was forced out last week. In fact, my husband usually measures how crazy the show is by the amount of yelping I do in the next room, and Wednesday night, I was pretty much quiet (yet silently stressing while hating on “Amanda” and Jack). Until the end where I shouted: I KNEW IT!

Let’s just skip to the ending. Emily finds out that Charlotte is indeed the daughter of Victoria and her father. As in, Charlotte is her half-sister. For all of Emily’s smarts, I’m kind of surprised that she wasn’t savvy to this possibility. But there it is, straight from her father’s mouth.

To rewind a bit, with Tyler gone, the episode sort of goes back to its original format. Emily has her eyes set on Mason Treadwell, the writer of a book that cemented the fact that her father was guilty in the minds of many. Including hers as a young girl. Back then Mason was known as Leo, a reporter covering the trial. David Clarke trusted him to tell his story objectively. And at first, Leo tried. He interviewed little Amanda, who believes she had to tell that her father was guilty or they would lock her away too. Leo agrees with Amanda that David is innocent and asks her: “How would you like to help me rescue your father?”

Anyone who has watched one episode of this show can guess what happened. Maybe even half an episode. (Or anyone listening to the scary music.)

The Graysons. They happen to everything.

Instead, we see a young Amanda crying over Treadwell’s book, burning the picture of her father, and living for many years with the fact that her father was a killer. Fast forward a handful of years, and our Emily is rereading the book, with the knowledge that her father was framed, and she is ready to bring this guy down.

Can I just say I love Roger Bart? I know him basically as a Broadway guy but he did a great job playing this pompous, over dramatic writer type. Anxious for more work but with a little bit of a conscious. 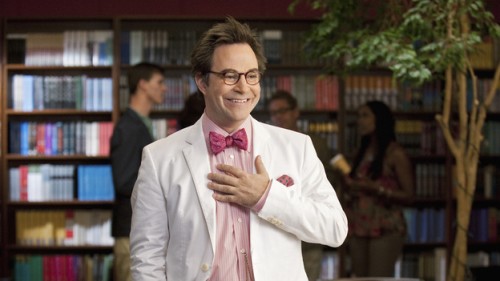 Victoria brings him back primarily to uncover the reason why “Amanda” is back in town. So Treadwell becomes the official best dresses person to ever enter the Stowaway and convinces Amanda to come over for another interview to supplement his in-progress memoirs. “Amanda” agrees and Emily finds out about it when she is touring Treadwell’s house with Nolan. A tour of all his great possessions including the tapes from his David Clarke book research. There is also great emphasis on the fact that Treadwell only has ONE hard copy of his memoir. (Remember that for later.)

Meanwhile, Amanda is showing her true colors at the Stowaway. I have no idea what is wrong with Jack but how can he believe this is Amanda? And even if he knew her too many years ago to know better, why is he in love with this girl? She turns the place into some trashy bar, resembling a bad Jersey Shore episode, where she is making out with girls and giving out dollar shots. (As if I could dislike her anymore…) Part of this might be punishment because Jack refuses to take her on a getaway to Atlantic City. You are in the gorgeous Hamptons and want to go to AC? Seriously? But he won’t leave the bar and Amanda tells him she believes he would if our Emily asked him. (Eye roll.)

When Emily shows up at the place, looking so put together, I just wanted to start screaming at Jack because I’m not understanding him at all. He’s blinded by some play dates on a beach. They must have been awesome. (OPEN YOUR EYES, JACK!) Anyway, Emily is there to talk to “Amanda” about her interview with Treadwell. Amanda learns for the first time that David Clarke is innocent. (I was shocked she had no idea.) Later, at the interview, Emily feeds Amanda the answers to most of Treadwell’s questions. (Apparently “Amanda” wants to make roots and start a family. Great. Go away.) In a pretty emotional scene, Amanda tells Treadwell that he is a fraud and can only make things right by coming clean at his reading at Victoria’s.

Let’s throw a little Daniel news in here. He’s made the decision to not rush into business school, and stay with his dad’s company. Victoria wants him to move back in, and he thinks he should at least wait until the end of this never-ending summer. Afterwards, he wants Emily to move into the city with him. (Here Emily says she is an old-fashioned girl who wants to respect her traditional parents and not co-habitat with him until they are married. What? I’m wondering if this is just a way for her to distance herself from him a bit as her feelings become more real. And also because she can’t keep going on with this revenge plan if he is always around her?)

Lawyer Huntley wants Victoria to set up an “insurance policy” against Conrad. Daniel needs to get his trust re-instated so that his shares combined with Victoria’s give them ownership of Conrad’s company. Connie’s too fast for them though. Daniel tells his father he is going to follow in his footsteps and Conrad agrees to reinstate his trust. He sneakily has the trust amended though. Daniel can get access to his trust but not the shares until he is 30 or married.

Genius idea! Daniel tells Victoria he will just marry Emily. He loves her! Why wait! As Victoria shoves her boobs in Daniels’ face, she is very shaken up by this. She still doesn’t trust Emily but she can’t tell Daniel that. He’s her lifeline right now. “If it gives you the upper hand, what’s the argument against it?” Oh, he’s got ya there Victoria. Or does he? Victoria enlists Ashley (who I have no love for at this point) to tell Emily about the amendment to Daniel’s trust and how a sudden proposal may not be totally pure.

Back to the reading. In probably one of the better flashbacks, we see Treadwell about to interview the Graysons. Immediately, Conrad wants to end the interview and little unknown Leo stands up to them. “I’m going to write this story with or without your consent. I have nothing to lose. While you, it would appear, have plenty.” We know how that played out.

Treadwell tries to plead his case to Victoria before the reading begins. Amanda knows. He’s going to be the laughing stock of the literary community! And here’s the thing. I thought he was going to tell the truth. I thought for once someone was going to stand up and do the right thing. We were so so close. Treadwell even had a little tear in his eye. But no.

Emily has no other choice but to torch his house, while Nolan discusses a possible book deal with Treadwell. Bye bye vintage typewriter and memoirs. But Emily outdoes herself. She leaves Amanda’s lighter as evidence. Can she bring down two at once? I guess we shall see. (Although Jack grossly agrees to take Amanda to AC so she has an alibi?)

She did manage to swipe the tapes, which leads us back to the beginning of this recap. Charlotte is her half-sister. Daniel is going to propose to help his mother but also because he loves her (and she loves him?) Bonus: Jack tells Declan that Amanda is out of his league. Bravo! Are we closer to this relationship ending? Boo factor: he takes her to AC anyway. And even though I didn’t mention him once, it was nice to see Nolan back in action as Emily’s sidekick. Dare I say it, I think they are finally going to be friends.

After everything that happened this week, let’s just leave on this happy note. And not think of the previews and Jack’s beautiful bloody face.

Missed this episode? Check out www.abc.com/revenge to catch up! Tune in next Wednesday at 10pm for a new episode!