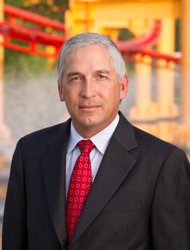 Former Disneyland and Disney Cruise Line President Matt Ouimet has been President of Cedar Fair amusement parks for half a year now. This week he gets the title of CEO as well. The Associated Press has checked in with Ouimet to see how things are going and to discover his plans for the future. As you might guess, Ouimet is bringing a lot of what he learned at Disney to Cedar Fair’s fleet of amusement parks.

He sees adding more rides that entire families can enjoy together and using technology to better connect with guests before they arrive and once they’re inside the parks. And there might be a few surprises added along the way.

Of Cedar Fair’s 17 amusement and water parks, Knott’s Berry Farm is Disneyland’s closest competitor by geography, but the real competition is the ‘staycation’ experience provided by its regional parks. If Cedar Fair ups its game for family entertainment to something approaching a Disney experience, then families will be much more likely to stay closer to home and invest their vacation dollars in their local economies.

Yes, that’s easier said than done. Ouimet took over a company buried in debt and struggling with maintenance issues. However, if Cedar Fair can over come its problems, letting Matt Ouimet leave the Mouse House may turn out to be one of the biggest mistakes of Jay Rasulo’s reign at Disney’s Parks.