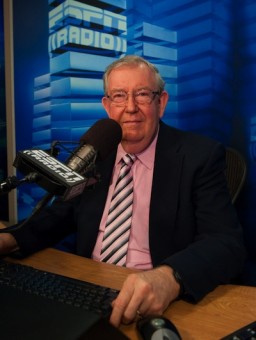 Veteran ESPN Radio SportsCenter Reporter Dan “The Duke” Davis will be signing off for good tomorrow as he retires after 20 years at ESPN. His final time at the mic will be 3:30 p.m. ET Friday at ESPN Radio’s Bristol, Conn. studios. I’ve loved listening to the comforting voice of Davis for years now and will miss his great turns of phrase, something that none of the other ESPN Radio sports casters have mastered.

USA Today has recognized Davis’ influence, referring to him as “a radio cult favorite” and an “icon.” And, Wheaties thought enough of his 1984 call of Doug Flutie’s famed desperation pass to Gerard Phelan on the final play of Boston College’s 47-45 win over Miami to feature it in its 2004 “Winning Moments” TV commercial in which a sandlot football game ends with a similar “Hail Mary” touchdown pass.

“ESPN is everything a sports guy could want, and more,” Davis says. “Hard to claim that what I’ve done for years qualifies as ‘work.’”

Plenty of ESPN’s other on-air talent have been sharing their thoughts about Davis’ retirement:

“Dan has been the great constant of ESPN Radio. I remember working with Dan when the network launched, and getting a chance to put a face with that unmistakable voice which is cemented in sports lore with the great call of the ‘Flutie Hail Mary’ in 1984. He is the best update man sports radio has ever known. No one delivers a story like Dan. Someone will work his shift, but no one will replace ‘The Duke.’” – Mike Tirico, fellow ESPN Radio “original”

“Dan has been everything you could ask a co-worker to be. A professional, first and foremost, but beyond that, a great role model who shows you how to do it without telling you how to do it. One of the proudest notches on my belt in this business is to say that we worked together, but a much more meaningful thing to call him a friend. I hope he plays golf every day until he gets sick of it and I can’t explain how much I’ll miss that voice or the man who used it so well for so long.” – Scott Van Pelt, whose show Davis provided updates for

“Duke has been my regular update anchor my entire time here at ESPN. He’s got the best pipes in the business.The Duke even sounds good when he yawns.  Wish him all the best, there’s none better!!” – Colin Cowherd, whose show Davis provided updates for

“It’s been a privilege for all of us to work alongside ‘The Duke.’ For 20 years, whether anchoring Sportscenter,Sportsbeat, or reporting live from the Masters and U.S. Open, Dan has been the gold standard for professional broadcast excellence. We can never thank him enough for his contributions to the growth and success of ESPN Audio” – John Martin, Executive Producer, helped bring Davis to ESPN Radio in 1992

“The thing I’ll always remember about Duke is sitting in the studio with him as I prepared for my shift following his, and we’d be talking about something going on in sports. If it was something that he had an opinion on, I’d sit there and listen to his update and he would find a way to work that opinion in without drawing any real attention to himself. It might be just one word, and it was always very subtle, but it was there. He was the master of that.” – Jon Stashower, SportsCenter update colleague

“The Duke’ is a radio legend. He brings to every SportsCenter a great voice, clever writing, and an amazing wit. He also happens to be one of the most loyal, kind, and generous individuals I’ve ever met. He will be impossible to replace.” – Bob Picozzi, SportsCenter update colleague

“On a team of terrific radio anchors, Dan Davis’ work has set the standard for the ESPN Radio network over the last 20 years.  Dan’s writing and delivery have been both distinguished and distinct; he could be witty at one turn, critical — but always fair — at the next, consistently representing ESPN Radio with both credibility and class.” – Pete Ciccone, ESPN Radio News Editor, overseeing SportsCenter update reporters

After his five decade New England-based broadcasting career, which began in 1962 at WEMJ, in Laconia, N.H., Davis now plans to concentrate on golf in Florida, mixing some radio work with his golf game – not in that order. Good for you Dan. We’ll miss ‘The Duke’, but you deserve it.