“I, Albert Narracott, do solemnly swear that we shall be together again.”

War Horse easily ranks as one of my most anticipated films this year. Since reading the book by Michael Morpurgo back in February, I looked forward to seeing Steven Spielberg’s big screen treatment of the WWI-era story. 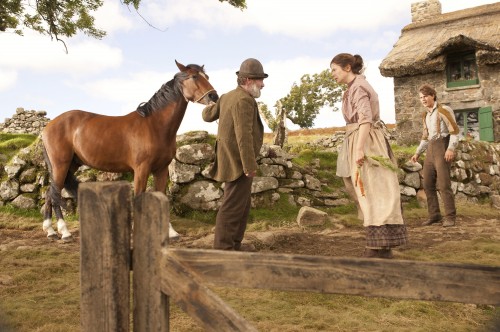 Performances by the largely unknown cast are overly dramatic at times, reminding me of stage acting or the earlier days of cinema. Lead Jeremy Irvine as Albert and supporting actors Tom Hiddleston (Captain Nicholls) and Niels Arestrup (unnamed grandfather) are strongest in their roles.

Spielberg’s tone for the film is heavily traditional throughout, at times to a fault. From Janusz Kaminski’s cinematography to John Williams’ score, this movie could have been made years ago. Some will appreciate this, others will not. I was caught square in the middle myself—no man’s land, you might say.

It’s the expertly crafted WWI battle scenes that are the film’s forte. That is where Spielberg is most in his element and it shows. And the Great War is not just pivotal for its action, but for what it means for the characters.

Fans of the book will be happy to find this War Horse mostly faithful to its source, except for the disappointing exclusion of one of the book’s most heart-rending parts, Joey’s bout with tetanus. (I’ve since learned this is not in the stage play, which I have yet to see, either.)

My view is that War Horse will be perceived very differently by different individuals. Many of the choices I found questionable, others will find no fault with. Whatever conclusion you come to, you have to respect Spielberg for making exactly the movie he wanted to.

War Horse opens in theatres on Sunday. It is one of two Steven Spielberg-directed films released in North America this weekend, the other being the motion capture-animated Adventures of Tintin. I found it to be “surprisingly fantastic”.