Editor: Estelle is back with another amazing recap of ABC’s Revenge. I apologize for the tardiness of her post. It’s 100% my fault. 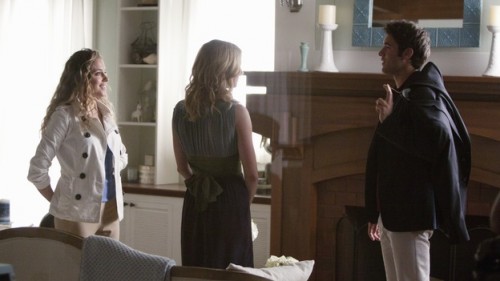 A few announcements before we begin:

Now that we’ve gotten that out of the way, this episode opens with Emily regaining control by practicing karate with Mr. T and divorce papers. It’s the beginning of the end of everyone’s favorite couple and Victoria seems thrown for a loop. Crappy for Ashley who is all dressed up for a breakfast and has suddenly has nowhere to go when Victoria doesn’t feel up to breakfast (or Ashley calling her “Victoria”). But Ashley is ready to suck up this morning and Victoria asks her to get Daniel back, which, of course, she can do. And now she can call her Victoria again.

We get the first of the awkward Ashley and Tyler run-ins when Tyler justifies his kiss with Nolan as him being ambitious and doing it for both of them. He invites her out to dinner that night – fancy place – and while she agrees, I’m not sure Ashley is on Tyler’s team like she used to be before.

Then there’s Jack. I thought he was a smart guy. But first, he believes “Amanda” when she says she is his Amanda from childhood. (Still not seeing the resemblance.) And then when Sammy the wonder dog can’t stop barking at her, Jack thinks the whole thing is a fluke. What? C’mon guy. “Amanda” also has blocked out her childhood and doesn’t want to hear Jack reminisce. I guess I can give her a pass on that one. Not too hard to believe that a person who went through what “Amanda” did might want to talk about anything. 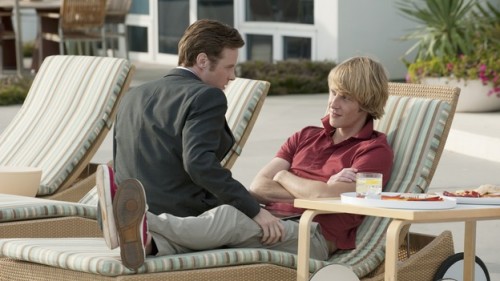 Lots of twosomes in this episode. Nolan and Emily are trading stories, and Emily wants him to take back his $20M investment. Nolan wants to wait, even when Emily gets more and more adamant about him. She believes Nolan is up to something, and she’s right. Nolan leaves her alone with his computer. (Hasn’t anyone learned this lesson yet?) She finds the heavy of him and Tyler getting hot and heavy and suddenly, the story has gotten that more interesting.

Afterwards, Daniel finds out about the big D from Ashley. Emily gets herself invited to Daniel’s lunch with his mom. (Much to Ashley’s chagrin; she’s not even hiding her annoyance with Emily at this point.) Beforehand, Emily tells Daniel that Tyler blackmailed Nolan to get the money. This explains the death look Daniel gives Victoria at lunch when she says she likes having Tyler around. (I’m sure her reasoning is because Tyler doesn’t trust Emily either.) New character alert! Ryan Hundley approaches Victoria about representing her in the divorce. (Apparently Conrad asked first but he turned him down.)

Emily stops by to see Jack. Of course, Sammy the dog loves her. I think Jack notices this. He tells Emily that “Amanda” has blocked out her childhood. Flashback: little Jack and little Amanda, crying hysterically as she hands over Sammy to Jack. “I’ll come back for you. I promise!” she says and her and Jack hug. I’m thinking she wants to come back for Jack and the dog. Flashback over. Emily leaves a note for him to give her. Emily wants “Amanda” to stop by the house. Maybe it’ll help her. “You are a really good person, you know that?” Oh Jack. On her way out, Emily asks Sammy to look out for Jack. (He definitely needs it.)

Scary music time. Tyler is frantically searching the poolhouse — most likely for Lydia’s awesome speech. Daniel enters and confronts Tyler about how he obtained Nolan’s money. “I have a gift.” What follows is Tyler freaking out when he realizes he has no pills left as Haunted Mansion-like music plays in the background. This can only mean Tyler is going to have a major breakdown at some point. Can’t wait for that one. (Especially since he is all-kinds-of-nuts while medicated.)

This next part was probably one of my favorite moments of the show. “Amanda” shows up at Emily’s house. “I thought you went completely rogue on me,” Emily says to “Amanda”. Give it up for Emily VanCamp, folks. This lady can turn on the charm and uber-sweetness when she wants to. Because she is, of course, just looking out for her friend, Emily gifts her the journal from when she was younger so she can fill in all the missing details. In comes Daniel who looks completely freaked out when he hears this is THE Amanda Clark. When she leaves, Daniel tells Emily that David Clark had been working for his parents when the attack killed all of those people. What news! Daniel also mentions that he is not going to tell his dad about Tyler. “He will dig his own grave.” It’s sometimes difficult to watch Daniel be so sensible and mature in a sea of crazed two-faced lunatics.

Cut to a dinner out with Mr. T. Daniel, and Emily. Once again, Daniel is trying to woo Mr. T. While Daniel is saying one thing to him, Emily and Mr. T are conducting their own conversation in Japanese. Mr. T thinks Daniel is “weak” and warns her not to let her fake feelings for Daniel become real. Emily looks conflicted. But she convinces Mr. T to invest $50 million with Daniel. Conrad leaks the news of Daniel’s triumph at a meeting with Tyler but announces Daniel still won’t be getting commission. These two do not even try to hide their disdain for one another anymore. And Conrad is loving it. “Envy is a powerful motivator.” Daniel finally decides to tell his dad that Tyler is playing dirty.

Ah, as you could have guessed, the plot thickens. Conrad fires Tyler for his sex tape rendezvous with Nolan calling his actions “less than honorable”. Anyone laughing yet? Tyler fights back of course, threatening to let everyone know that he and Victoria are the reason why all of these people are dead, not David Clarke. Well, clearly he has the upper hand in this situation now. When Daniel finds out later that Tyler is still working for his father, he’s flabbergasted because his dad can’t exactly tell him WHY. Daniel shouts about morals and integrity and my heart goes out to him even more. Is he really that naive?

In the meantime, Tyler goes over to Nolan’s and accuses him of ratting him out to Conrad. Nolan seems his most vulnerable right here. He says he’s pulling his investment but he didn’t tell Conrad anything. If anyone is going rogue it’s Tyler, as he throws Nolan’s trusty laptop into the pool. (Anyone else convinced that Nolan has a backup? He’s not an idiot.) Somehow later though… Tyler has a computer. I’m guessing it’s the same one. But now he has the video of Lydia admitting she was forced to lie about David Clark. Like this guy needed anymore ammunition.

In a few other corners of the Hamptons, Declan is trying to get an apartment for him and Charlotte with the money from Victoria. After a stern lecture from Jack, Declan decides to give the money back, not move out, and be the guy Charlotte deserves — a guy who finishes high school and goes to college. I like Declan and all. I think he and Charlotte are sweet, but sometimes they seem like air fillers to me. Victoria is visited by her new lawyer who tells her she cannot have contact with Conrad, must provide absolute financial transparency, and be ready to do whatever she can to win her case. She’s game. (She is also without Charlotte, who decided she would rather live with her dad. Frankly, I don’t blame her.)

“Amanda” is caught by Daniel digging around Emily’s house. He’s weirded out by her for sure. (What does he know and what will he do/would he do if and when he found out that his Emily is indeed the real Amanda?) Jack and “Amanda” keep kissing and I’m tired of it. After “Amanda” leaves, Daniel warns Emily to be careful about her. Oh Daniel.

Shockingly enough, Ryan Hundley is the same lawyer who dropped David’s Clark’s appear. Next victim? We shall see. Mr. T makes another appearance but it may be his last.

Mr. T: You are in love with him. When you came to me, you were just a little girl. So much rage, so much betrayal. I did not want to train you because your emotions destined you to fail.
E: I have separated myself from my emotions.
Mr. T: You lie to yourself.

And he leaves her. Daniel does too, but only for the night. He wants to make sure his mom is okay. He thinks Tyler is a loose cannon. Daniel calls Emily and is caught talking about Amanda Clarke by Victoria who looks like she has seen a ghost. Absolutely love where all of this could be going. Of course, the sudden broken alliance between Nolan and Emily too. He tells her that her father would not like who she has become; she has become too wrapped up by all of this crap. Emily looks like she has been slapped in the face. That’s the thing about Emily. She spent all her time obsessing over avenging her father’s memory and clearing his name, and she didn’t think she would get wrapped up in anything? That’s just how far from reality she has been.

Hope most of you tuned in for the promo, where we saw all the main characters seated at a table with Tyler pointing a gun at them. (My husband’s response to this: “I think that guy should just shoot all of them. They can just all come back from the dead the next week anyway.”)

Look for a new episode on January 4th. In the meantime, I’m challenging you to go back and rewatch the beginning of the season. All the episodes are available on abc.com. Also, check out this article that explains the series and what we can expect in the future. (Vague spoilers but too intriguing to pass up!)