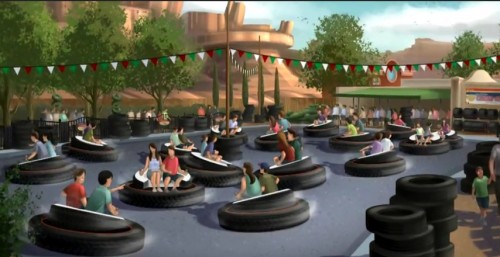 We just learned that parts of Cars’ Land at California Adventure will open in summer 2012. Work is progressing at a frenzied pace and the details in Cars’ Land are coming into focus. One of the most important touches will be the recreation of Main Street Radiator Springs. Right in the middle of that scene will be Luigi’s Casa della Tires, which is home to a new attraction that recreates the fun and excitement (but hopefully not the troubled operation) of the 60s era Flying Saucers of Tomorrowland.

The leaning tower of tires in front of Luigi’s Casa della Tires was recently installed in Cars’ Land at California Adventure. It was a big production as crews literally parked a crane in the middle of the job site to lift the tires into place! Cathy Ritenour, production designer, was responsible for ensuring the tower was fabricated and installed to specifications.

Here’s a look at how they did it: