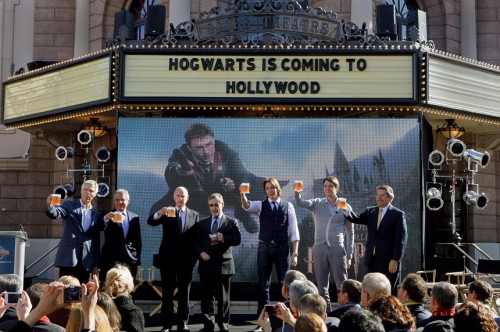 A few years ago you could fire a cannon down any pathway in Islands of Adventure and have little risk of hitting a soul. But a big change swept into the park and with it a ton more visitors, all opening their wallets to take home a little bit of the magical world they spent their childhood exploring in books and movies. Universal Studios’ coup to acquire the Harry Potter franchise for theme parks from J.K. Rowling not only kept Disney scrambling to find its next big thing, but has become a license to print money.

Within just a few months of the Wizarding World of Harry Potter grand opening, Universal Orlando Resort (UOR) had already earned back its $250 million investment. Word began to spread that Universal would be looking to expand in Orlando and bring some of the Harry Potter brand of magic to its other parks around the world. Then the LA Times got word that Universal Studios Hollywood (USH) would be the first location. This morning, Universal held a press event and the rumor became fact.

New video from this morning’s big announcement is just in:

The announcement this morning solidified two major rumors concerning Universal Studios partnership with the Harry Potter franchise. It confirmed that Universal Studios Hollywood will get its own version of the Wizarding World of Harry Potter (WWoHP) and it confirmed that the original WWoHP will be getting a major expansion. Few other details were released. We do know that the USH version of Hogwarts Castle will be inside the park somewhere, but that’s about it.

That means there will be a lot of speculation over the coming weeks and months about exactly how and where they should build in Hollywood and expand in Orlando. Park officials said it’s going to be a few years before they even break ground. 2016 is the estimated opening for USH and the UOR expansion won’t likely open until after that.

So I’d like to hear your ideas for how Universal can continue to create the best theme park experience possible with the Harry Potter franchise. Where should they build at USH? What should they add to UOR?