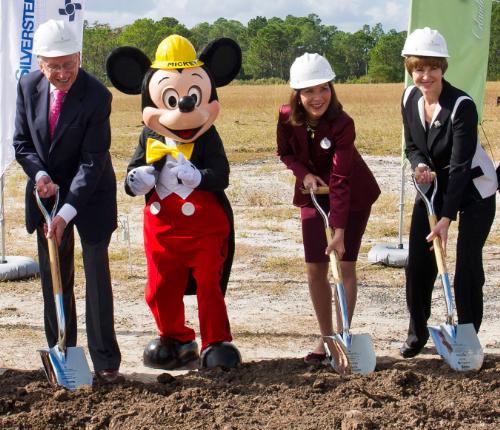 Four Seasons Hotels and Resorts kicked off construction of its luxury resort at Walt Disney World Resort in a groundbreaking ceremony with joint venture partners Silverstein Properties and Dune Real Estate Partners. The 444-room resort, being built in the enclave of Golden Oak at Walt Disney World Resort, will create about 2,000 construction jobs, and hundreds of resort positions when open.

Land is the most valuable resource Walt Disney World possesses. It gives the theme parks a border they use to defend against the outside world. The idea of Disney World selling off pieces of its property is a bit controversial, but Four Seasons will bring a class of visitor and business traveler to the resort that Disney just hasn’t been able to reach before.

Kathleen Taylor, President and CEO of Four Seasons Hotels and Resorts, spoke of the relationship with Disney: “Each of us is dedicated to creating a product of the highest quality and standards, something that will become a landmark here in Orlando, and a destination unto itself for travelers from all over the world. It is truly a one-of-a-kind project and Central Florida will be a valuable addition to our family of resorts, particularly since this is a destination our guests already enjoy.”

The development will encompass the existing Tom Fazio-designed Osprey Ridge 18-hole championship golf course, which will be renovated and subsequently managed by Four Seasons. The first Four Seasons in Central Florida is located within the Golden Oak residential community at Walt Disney World Resort.

Larry Silverstein, president and CEO of Silverstein Properties, recalled making the decision to back the project. “At the end of the day, it became apparent that the concept was right; that the team superb; the location first class and the two names – Four Seasons and Disney – as good as you can get,” he said.