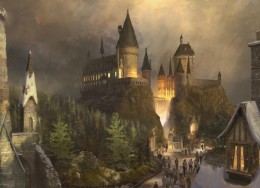 When I lived in Southern California, the theme park I visited the second most often was Universal Studios Hollywood. I lived within walking distance and would often find myself on the Backlot Tram or watching Waterworld when the thought of driving across town through traffic to Disneyland was just too much. I knew every short cut, menu item, and show schedule and could tell you when the best times to go or even how to avoid paying for parking if you really wanted too. It wasn’t Disneyland, but it was like drinking Folgers when gourmet coffee wasn’t available. You still get the cafe experience, but the quality wasn’t there.

A story in the Wall Street Journal today states that that Universal Studios Hollywood is ready to start grinding its own beans. Sources tell the WSJ, that the theme park and working studio will be the second location to get a Wizarding World of Harry Potter land. Reports are that it will be a replica of the Orlando version, but my guess is they’re just talking about the Village of Hogsmeade and the Hogwart’s Castle showbuilding that contains the Forbidden Journey attraction. Any other attractions will be custom to Hollywood, since those were basically new themes on existing attractions at Islands of Adventure.

If Universal matches the detailed design and immersive environment that was built in Orlando, the Southern California theme park game will get a lot more competitive when WWoHP opens at USH. It’s likely the contract requires them to meet J.K. Rowling’s high standards when building the replica.

The real question is will will they put the expansion. The show-building for Forbidden journey is huge. There is no current building at USH that matches it for its footprint and there is no space atop the hill that would then also be big enough to add the village area, let alone other attractions. There is plenty of space in the lower lot, but that area is also a working studio, so they’ll have to think carefully about that. There’s no doubt that the massive profits WWoHP brought to Florida would be good incentive to tear down and replace existing attractions or shows that are under-performing.

Is Universal shooting itself in the foot by diluting the draw of Universal Orlando? No more than Walt Disney World hurt Disneyland, ie, not at all. The SoCal market has a much larger local base to draw from and Universal Studios Hollywood still benefits from, you know, being in Hollywood, a major tourism draw in its own right.

Now, I remember a few years ago when USH was planning on adding a whole second gate on the otherside of the Citywalk. That would be a real power move, not just a Harry Potter land, but a whole park based on the world created by Rowling. That would be something.

What do you think, would this be a good move for Universal Studios?