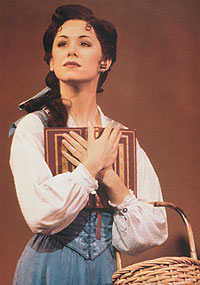 I’m a big fan of Susan Egan’s work for Disney. In 1995, I saw her at the Shubert Theater in LA as Belle. I loved the voice work she did for Miyazaki’s films (Lin in Spirited Away was great), and, of course, Meg from Hercules is one of my favorite Disney heroines. I also saw Egan as Sally Bowles in Cabaret at the infamous Studio 54. It was very weird to hear Belle’s voice come out of that character, but she swiftly transported me to the life of Sally Bowles (who is pretty much as opposite of Belle as you can get).

Egan has just released a new CD, “The Secret of Happiness,” that reflects on her success for Disney and across the world of entertainment. Disney fans will also want to note that, beginning in April, Egan will be taking her one-woman concert back on the Disney Cruise Line with appearances on the Disney Fantasy.

The first music video from her CD was launched on YouTube yesterday and it quickly rose to the top of the favorited list. “Nina Doesn’t Care” is a tune lamenting the fact that Egan’s daughter doesn’t care AT ALL that she’s a Disney Princess. The cool thing about the video is that Egan interacts with 2D animated characters, created especially for the video by former Disney animator Ken Duncan who animated Meg in Hercules (Jane in Tarzan and lots others).

Nina Doesn’t Care and the full album are available today on Amazon and iTunes.