Dancing With The Stars – Week Eight – Someone Must Go

The Final 4 is revealed…. 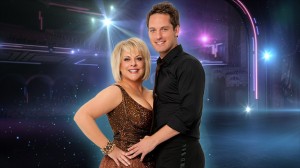 Last night the stars were on double duty- two dances, two scores… and the best points possible out of 60. So who was sent home packing?

The show kicked off with the female dancers, dancing to “I Am Woman”.

Then the recap began- they showed behind the scenes clips from last nights show. All the contestants rehearsals and the judges goofing off with them. You really get to see Len, Bruno & Carrie Ann’s personalities. I would recommend going back and watching it… it’s fun to watch! Also ESPN fans, check out DWTS own version of the “This is Sportscenter” commercials; it happens multiple times throughout the episode.

The first couple to be saved- no surprise here – J.R. Martinez and Karina! The couple scored a perfect 60 last night, and they were saved. Hope and Maks were saved shortly after.

Like I predicted last night, Rob & Cheryl would be “still in jeopardy”…..two couples are in the semi-finals, one isn’t safe just yet.

Then it was time for the mid-show break. Andrea Bocelli graced the stage with Chris Botti. They performed a beautiful song to which three non-celebrity, yet professional dancers, danced to.

Next was a TV premiere of the newest Cirque Du Soliel show performed by the Macy’s Stars of Dance… with music provided by Michael Jackson’s the Immortal World Tour. It was definitely a night of entertainment. Like any fan of Dance, Cirque Du Soliel is a must see — and this performance was right up there with the rest, especially considering the limited space they had on the DWTS stage! It was really entertaining!

After the performance it was time to get serious, the next couple who made it into the semi-finals… was Ricki & Derek. No surprise there. The couples in jeopardy are Nancy & Tristan and Rob & Cheryl.

So three are safe, which leaves two that are not. Who do you think is going home. Drum roll please…

Nancy found herself at the bottom of the leaderboard last night… but viewers have saved the pair in the past. But not tonight. Nancy & Tristan were sent home. Nancy said she was so proud, but couldn’t take any of the credit. She thanked her partner, the entire cast of the show, and her family for flying out to take care of her twins. Such a bittersweet goodbye!

Overall it was a great show! We are down to our final 4 and what a fantastic final 4 it is!

Stay tuned for next weeks DWTS where the Semi-Finals begin. Hang on to your hats.

When she’s not visiting the land of 1000 dances, you can find Brittany on Twitter as @EnchantedEscape.