Owner of WDWInfo.com and the DisBoards Profiled, Stirs Passion 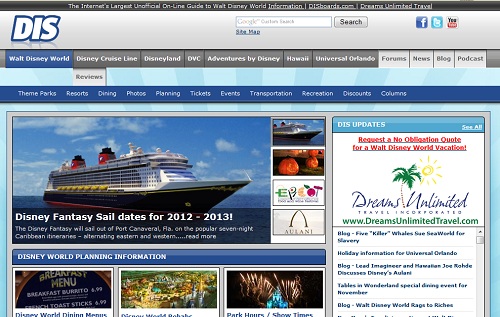 Here’s a little secret about how The Disney Blog came to be. Back in 1999 when the dot-com bubble was still inflating, a group of us Disney fans that hung out together at Disneyland started talking about what we could do to offer some service to share out knowledge with guests who were planning travel to Anaheim. That group eventually produced a half-dozen or so travel planning sites with fan communities of their own; the two biggest being LaughingPlace.com and The D-I-G (which begat MousePlanet which eventually split and begat Miceage).

I helped start LaughingPlace.com in 1999 and wrote and worked for Doobie and Rebekah (who did the lion share of the work (and still do)) through 2004 when I started this blog. At the time The Disney Blog was among the first dedicated Disney blogs and the only one that covered the whole of the Walt Disney Company, its history, people, fans, and competitors.

This community of Disneyland focused sites drew their inspiration from two main Walt Disney World sites Intercot and WDWInfo (Deb Will’s amazing AllEarsNet was going then too, but didn’t have discussion forums). The owner of WDWInfo (also known as The Dis) was Pete Werner. We had met Pete online (we all hung out on Usenet groups then) and knew we could replicate his success. But the fact is The Dis is still the king of Disney fan communities.

That’s not to say all this didn’t happen without some controversy and personal struggles. It did. There was a lot of it, in fact. A newly published interview with Pete in the Broward County New Times gets into a lot of the backstory behind the controversies. Additionally, it has been generating some controversy of its own.

My own take on this is that we’re all flawed in some way or another. I agree with a lot of the things Pete says about Disney (particularly D23 and how fans are important to WDW) in this piece, but perhaps not with the tone he’s quoted as using. And that’s just the thing, these are quotes, removed from a 14 year context and history that is Pete’s enormous contribution to the online Disney fan community. Sure, he’s used it to make a buck here and there and he has upset more than a few apple carts along the way. But as they say, you can make an omelet without breaking a few eggs. The DIS is one tasty omelet and its community members raise a ton of money for charity and for each other when one of them are down.

Here at The Disney Blog, a day doesn’t go by where I’m not thankful for the help of one of my guest writers, a fan who sends me an email, or another blogger who reaches out with a story or link. You all are the greatest, I could not do this without you.