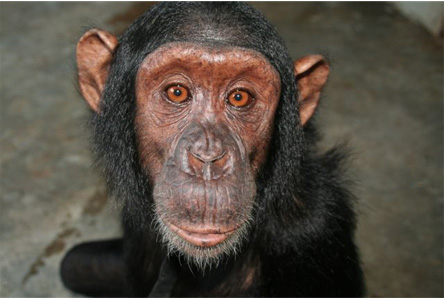 Minni, one of the Chimpanzees helped by DWCF

The Jane Goodall Institute was awarded $5,000 for veterinary supplies to vaccinate chimpanzees and staff against a dangerous measles outbreak at the Tchimpounga Sanctuary in the Democratic Republic of Congo. Chimpanzees are highly susceptible to human diseases, and the high cost of vaccines for 146 chimpanzees and 60 staff members jeopardized the team’s ability to cope with future medical emergencies.

The Pan African Sanctuary Alliance (PASA) was also awarded $3,000 to assist in the relocation of four orphaned chimpanzees confiscated from smugglers in Sudan. The chimpanzees, Cocoa, Minni, Sarah, and Medina, are all orphans of bushmeat trade and are believed to have been smuggled from the Democratic Republic of Congo. They are too young to be able to care for themselves but Minni and the others are adjusting well to their new sanctuary home in Uganda. DWCF helped cover the cost of air travel to relocate the chimpanzees from Sudan to Uganda.

The Disney Worldwide Conservation Fund Rapid Response Fund provides emergency funding to wildlife and wild places in the aftermath of disasters such as earthquakes, hurricanes, tsunamis, and disease outbreaks. Since the beginning of 2011, DWCF has contributed more than $40,000 to emergency relief efforts worldwide including repairing an educational walkway damaged in a storm in Zimbabwe to allow for continued youth conservation education efforts, and supporting the needs of the International Primatological Society and Japanese Association of Zoos and Aquariums following the devastating earthquake in Japan. The funding for these emergency grants has been provided through a partnership with Disney’s Friends for Change and iTunes, thanks to several anthems created by stars from the Disney Channel. Coinciding with the premiere of the most recent song by Bridgit Mendler, “We can Change the World,” Disney contributed $250,000 to the Disney Worldwide Conservation Fund to help the planet when it needs it most.