Editor: Please welcome back guest author Estelle with a review of ABC’s Revenge.

Beware of the spoiler. (Unless you are like me and can’t help yourself.)

Like Billy Joel says, it’s a matter of trust.

And Emily doesn’t have a lot of it. Who can blame her? The second episode of Revenge introduces us to the next “victim” in her take downs: Bill Harmon, a hedge fund trader, who seems to have been one of her dad’s best friends before he testified against him in court. (Anyone recognize Matthew Glave from his Miami-Vice portrayal of Glenn in The Wedding Singer?) Bill was even around when her dad gave her the adorable golden retriever (with a stellar memory) when she was a little girl. Emily, of course, does what any girl on a mission does… she convinces Bill to invest all of his money into AllCom, a cellular company that her old buddy Nolan is rumored to be joining forces with. 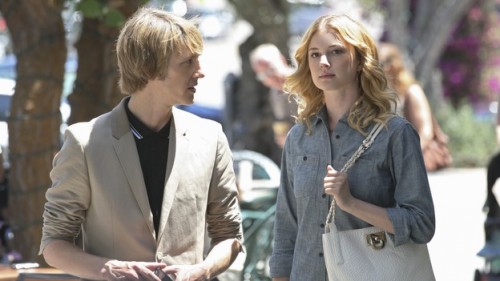 This is why I don’t invest in stocks because I didn’t see this coming. Nolan decides to invest in another company and Bill is basically screwed. All the money, gone. Not as glamorous as revealing the affair last week but hey, Emily won… again.

In the meantime, Victoria is on the prowl and in her quest to embody every single nutty, maternal Disney villain, this week she nailed Mother Gothel (Mother knows best) from Tangled. I’m not sure if she plays suspicious as a sport or she truly feels that something is amiss with Emily but she has her security on Emily’s tail and even invites the girl over for a spot of tea where they trade lies for an afternoon. The tension in the room is stifling; these two certainly have met their match.

Truthfully, Victoria could just be very protective of her gorgeous son. A little mommy-son syndrome. I guess on one hand she has every right to be cautious because Emily is not really who she says she is, but does Victoria seriously have a sixth sense about these things? Emily is in no way predictable (in fact, I don’t remember ever being thrown for a loop so many times by the same character). That leads me to the next thing – does she really have feelings for Daniel? We know from the first episode that they eventually get engaged but does she really take the “game” that far? She’s getting close to him to get closer to his family but is there something there? 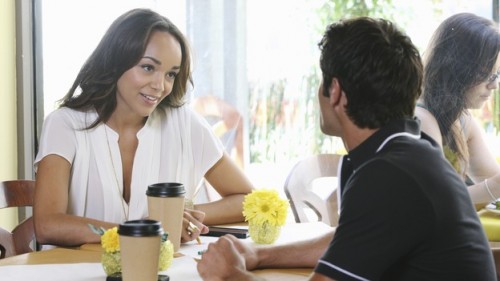 Call me crazy, but I don’t feel the fire between these two. I’m still rooting for Jack and Emily/Amanda to sort things out in some bizarre universe. Again, we are treated to ONE (only one) scene with the two of them actually speaking and the chemistry is there. Leave it to me to want the impossible. But maybe it’s a good thing that Jack hasn’t recognized her (is it that hard?) because he has bigger fish to fry. He sold his boat to Nolan only to become his personal skipper, his brother (Declan) is getting beaten to a pulp because he’s lusting over Charlotte Grayson who has a “boyfriend” (is betrayal a family trait?), and his dad may or may not have had a fatal heart attack (stay tuned).

Quite a mouthful, huh?

I guess I was a little naive thinking the tangled web of Revenge storylines would calm down in the second episode. There is still a lot to keep track of. (I’m glad Emily has that picture to keep things in perspective.) One thing I couldn’t help thinking about was the survival rate of a series of this nature. Emily plans to go one-by-one destroying the people who destroyed her father. And then what? I’m sure there’s a twist coming somewhere, but am I the only one who can’t foresee this show will last more than a season?