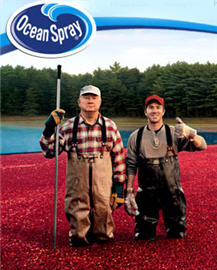 I wonder if these guys will be at EPCOT

The food and beverage partnership that was announced last October, is finally coming to fruition. The last few months have seen small changes at Walt Disney World restaurants. Craisins are now showing up in more recipes and on restaurant signs. And now, Ocean Spray will bring the Cranberry to the Epcot(R) International Food & Wine Festival. Chef Ming Tsai and Ocean Spray Growers will debut the first Cranberry Bog Exhibit celebrating the taste, health, and heritage of the Cranberry at the festival.

“Three quarters of Americans have never heard of a cranberry bog, never mind witnessed the beauty of the cranberry harvest firsthand,” said Ken Romanzi, Ocean Spray’s chief operating officer, North America. “Through our sponsorship with Disney, we are thrilled to educate a whole new group of people who might not otherwise understand the journey of their favorite Ocean Spray products, like Ocean Spray(R) Craisins(R) Dried Cranberries, from the bog to their favorite recipes.”

I’m actually a big fan of Craisins myself. I like adding them to my chicken salad or just eating them plain. I’m looking forward to this exhibit and maybe learning a few new uses for the flavorful food.

The Walt Disney Company and Ocean Spray(R) — two iconic American brands that have captured families’ imaginations and appetites for more than 80 years each — today announced the debut of the first cranberry bog exhibit at Walt Disney World(R) Resort in Lake Buena Vista, Fla., during the 2011 Epcot(R) International Food & Wine Festival from Sept. 30 to Nov. 13.

For cranberry lovers visiting the popular theme park this fall, dreams really do come true as Florida natives and vacationers alike will have the opportunity to be inspired and enlightened by Ocean Spray growers and Disney cast members stationed at the experience, filled with more than 1,500 lbs. of cranberries. In addition, Ocean Spray(R) Craisins(R) Dried Cranberries, the official fruit snack of the Walt Disney World(R) and Disneyland(R) Resorts, will be sampled bogside from on-site kiosks.

From Sept. 30 until Oct. 2, third, fourth and fifth generation Ocean Spray cranberry growers will share the majestic beauty and mystique of the cranberry harvest. With the help of Chef Ming Tsai — host of public television’s Emmy-nominated “Simply Ming” and chef/owner of the award-winning restaurant Blue Ginger — consumers will learn about the unlimited versatility of the cranberry via a cooking demo for park attendees of all ages.

On Oct. 11, Chef Ming Tsai will make a special appearance to whip up an array of worldly cranberry creations celebrating the versatility of the cranberry and the many cuisines and cultures celebrated in the World Showcase at Epcot(R).

“I am very excited to dive into the adventure of the Epcot(R) theme park and inspire families with a seasonal fruit every generation can relate to,” said Tsai, “I use Ocean Spray(R) Craisins(R) Dried Cranberries every day in my kitchen back home and am amazed by the breadth of versatility of the cranberry throughout the restaurants at Disney.”

Consumers visiting the Epcot(R) International Food & Wine Festival are encouraged to explore how chefs from every continent use Ocean Spray(R) Craisins(R) Dried Cranberries to enhance the full flavor of their dishes. Ocean Spray(R) Craisins(R) Dried Cranberries are being offered at various retail locations throughout the Walt Disney World(R) and Disneyland(R) Resorts, including theme parks, cruise ships, meeting rooms and hotels. The product is highlighted in special signature salads, cranberry muffins and sold in fruit cart stands and kiosks inside the theme parks.

Today, a majority of the Disney licensed food portfolio consists of healthier options, including produce and low-fat dairy. Ocean Spray(R) Craisins(R) Dried Cranberries are made from real fruit, are naturally fat-free, cholesterol-free and a good source of fiber.