For the two brand new episodes of Modern Family that aired back-to-back last night, I thought I would do something a little different with my weekly recap. Instead of walking you through the story detailing each scene, I thought I would simply provide a few thoughts on each episodes and offer some telling pictures. 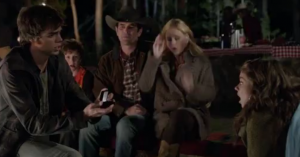 The first episode, “Dude Ranch,” saw the entire family visiting a dude ranch in Wyoming. Dylan comes along, and Claire finally learns that she should be a little more accepting of him. All this is shattered, though, when Dylan proposes to Haley in front of the whole family. 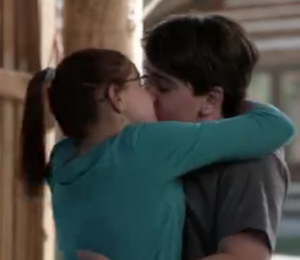 Moving on to my second favorite storyline of the evening, we get to see Alex get her first kiss “stolen” from someone she refers to as “a Mario brother.” Personally, I find Ariel Winter (the actress who plays Alex) a little hard to believe at times, but I thought she was very sincere in how she handled this situation. By the end of the episode, Alex and her ranch-found love are smitten and we see Alex jump into his arms. (I wonder if we’ll see more of him later…even though they live thousands of miles apart.)

Luke: "After this, we're going to have some angry birds!"

Meanwhile, Cam and Mitchell are putting together a scrapbook to show potential parents of the American boy that they wish to adopt. (As they said, they are “buying domestic” this time.) This leads to Mitch (who thinks he’s not masculine enough to raise a boy) playing along with Luke, blowing up the birdhouse that’s been bothering him the whole episode.

Back to Dylan. He isn’t seen the entire night after Claire rejects his proposal to Haley. When he’s found the next morning, he announces that he’s been hired to work at the dude ranch. (Is this the end of Dylan?) And throughout the whole episode, Gloria is deafened by the fact that her ears haven’t popped which offers some comedy, and the ranch-hand hits on her during the entire vacation. Jay comes to Gloria’s rescue (with the aid of “Buffalo Phil”) and the family goes home. 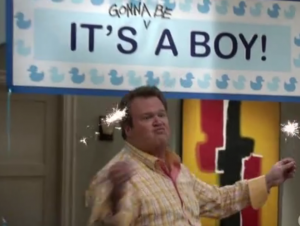 Cam's planned way of making the announcement to the family.

The second episode, “When Kids Go Bad,” wasn’t as exciting. It centered around Mitch and Cam dealing with the fact that Lily is rejecting the idea of a new baby. (Rejecting is putting it lightly, she says the whole episode that she is going to kill the new baby, and we even see her attacking a baby boy sitting on Cam’s lap.) Mitch is quick to blame Cam for coddling her too much, but it turns out that it might be Mitchell’s inability to share that has rubbed off on Lily.

When Claire and Phil visit the grocery store, Claire falls into a pile of cans and blames it on Phil. This causes an argument throughout them the entire episode, with Claire feeling that she must prove herself right. In the end, she goes through a lot of trouble to obtain security footage from the store just to prove that she was in fact, right. (Phil should just learn that Claire is ALWAYS right!) 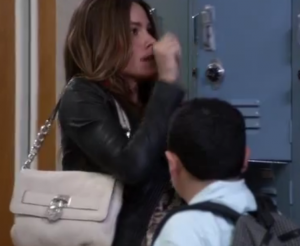 Manny is in the hot seat when he “accidentally” steals a girl’s locket from school. Gloria insists to the principal that he didn’t do it. When she discovers he did, Jay says that he Manny just confess. Gloria takes a different approach, breaking into the girl’s locker (using her credit card) to replace the stolen locket.

The obvious C-story in this episode is Alex and Haley convincing Luke to move into the attic so that they can each have their own rooms. Claire claims Luke will be back in his own room by the next night because the attic is cold and scary. Turns out, Claire is right again and Luke gives up his “penthouse.”

After both episodes, I was just happy that Modern Family is back on the air. “Dude Ranch” had be laughing, and even shocked me at some points. And while I didn’t find “When Kids Go Bad” as endearing, it’s nice to see the storyline of Cam and Mitch adopting another baby continue to evolve. What were your favorite moments from last night’s episodes of Modern Family?