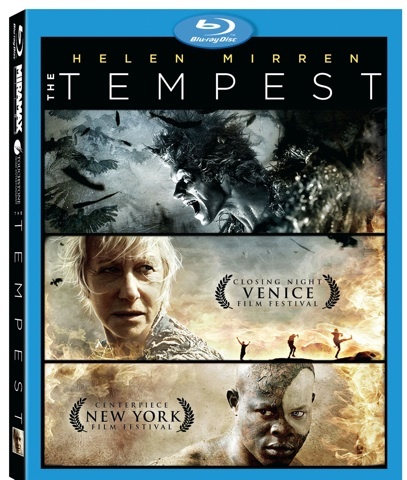 Given the expectations associated with such great names, though, “The Tempest” did not deliver on any account. I will not critique the story because that is all original to Shakespeare, but you can read about it here. However, despite the stunningly beautiful scenery, which was amplified by the Blu-Ray quality, the movie was very slow, difficult to follow, and outright bizarre.

Their attempts at making the film contemporary were conveyed through ill-suited heavy rock music, unnecessary trippy effects, unconventional and overused editing techniques, and popular actors who did not seem to fit the roles they were assigned (particularly Brand, whom I thought was very out of place). Setting the artistic elements aside, though, the dialogue was very difficult, sometimes even impossible, to comprehend. While I understand the complexity of Shakespeare’s writing and am familiar with his particular style, neither myself nor my mom could understand anything that was said for the first 10 minutes of the movie. Whether it was a problem with the audio quality or the accents used, there were times where what they were saying literally sounded like gibberish, which made our job as viewers infinitely more challenging than it should have been.

I won’t deny that this film could be appealing to some. My mom made a good point; she said that sometimes with Shakespeare’s plays, filmmakers will do anything they possibly can to make the story interesting and exciting by today’s standards. This can be particularly challenging, since the plays were written in a dialect that can no longer be fully understood by the average person, and often address topics which can be difficult to connect with in a modern society. However, after watching this film, neither myself nor my mom had any idea what the play was about, which seems like the one thing a filmmaker would want to clearly convey when adapting a Shakespearean work. I could guess that the play is about revenge and letting grudges go, but it was all very unclear.

For anyone who is interested in seeing “The Tempest“, they must be prepared to give it their absolute undivided attention and more. This movie is surely an unforgettable experience for anyone who has the patience to sit through it.