Let’s get this out of the way: I’m a hardcore Shonda Rhimes fan. I’ve watched Grey’s Anatomy and Private Practice since their respective pilots, through the good seasons and the bad, through the moments of brilliance and the moments of …. ghost love. (I even loved Off the Map, which was canceled way too soon.) So when I was given the chance to review the latest box sets on DVD, I jumped at the chance.

The seventh season of Grey’s Anatomy is one of recovery.  After the sixth season ended with a mass shooting inside Seattle Grace (which, in my opinion, was one of the best season finales of any show ever), this season focuses on the characters trying to put their lives back together – physically, mentally, and emotionally. It’s a strong, relatively quiet season, with the exception of the musical 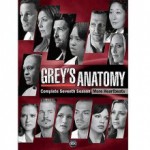 elephant in the operating room.

Grey’s Anatomy made headlines last year when it announced it was doing a musical episode, in which Callie teeters between life and death after a car crash. Longtime fans of the series know that Grey’s is no stranger to out-of-body experiences (remember Meredith’s brush with death? Or Izzy’s?), but this time around, it feels … forced. When done right, musical episodes can be amazing and move the plot forward in a meaningful way (see: Buffy the Vampire Slayer). When done wrong, things get muddled, and that’s what happens here.

The problem actually lies with the concept itself. In a musical, characters share the thoughts and emotions that they cannot otherwise share through song. This is what makes musicals so powerful. And one of the things that has always set Grey’s Anatomy apart from other series is its use of indie music to tell the characters’ stories when they themselves can’t. In a way, Grey’s Anatomy was already a musical. So an episode where characters sing those same indie songs during moments of heightened emotion turns into a cacophony of melodrama. But, for those viewers who are into it, the DVD set includes an extended episode and a behind-the-scenes look.

Moving our way down the west coast, we arrive at Oceanside Wellness, where the doctors of Private Practice get all hot and bothered and shouty and moody. There are weddings, secrets, lies, and breakups, but really, the fourth season boils down to one unforgettable hour of television. 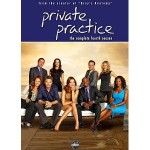 It is impossible to talk about the fourth season of Private Practice without mentioning The Rape Episode (actual title: Did You Hear What Happened to Charlotte King). When the episode originally aired, I thought the plot was rather contrived, as though Shonda & Co. decided that Charlotte, the one woman on the show with her act together, had to fall apart. She needed to have her “thing,” because everyone on a Shonda Rhimes show has a “thing” – some horrible past experience or major screwup that prevents them from being fully functioning emotional beings. Without this, the characters cannot continue acting as their own obstacles on the road to happiness, and there would be no show.

But back to The Rape Episode. It’s gutsy television, no doubt, probably the most graphic and disturbing portrayal of rape ever shown on network TV. And it’s wonderfully acted, and I was really surprised that KaDee Strickland didn’t pick up an Emmy nomination for her work this season. Watching Private Practice’s only strong, stable, relatable female character become a shattered version of her former self is truly heartbreaking. And although I don’t agree with the dismantling of her character (because there’s already one rape survivor at Oceanside Wellness – Violet – so why go there again?), the fact that Private Practice tackled the issue head-on is pretty commendable. The DVD set includes a lengthy feature on the making of the episode, and I was pleased to learn that the cast and crew had lengthy consultations at crisis centers and that KaDee Strickland has made helping rape victims a personal platform.