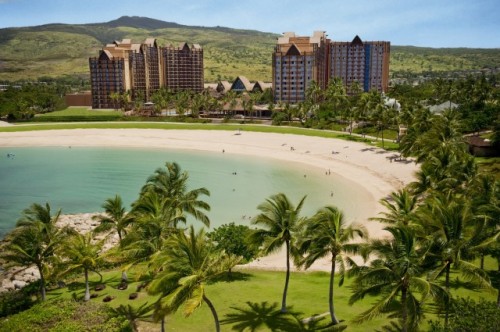 A few more reviews for Disney’s Hawaiian resort are trickling in. Most note how Disney has emphasized telling the story of Hawaii over traditional Disney touches, but I would argue that storytelling is the quintessential Disney touch. So I’m glad to see they chose that direction in Aulani.

Bradi McDonald of the LA Times is currently ensconced in the resort with his family, but he sends this update:

The 21-acre resort, about 30 minutes from Waikiki, is worlds apart in look, feel and spirit from that tourist mecca of high-rise cement monoliths.

We were greeted at our rental car by an Aulani hostess who presented Nancy and Hannah with flower leis and me with a kukui nut one before explaining the symbolic elements of the open-air lobby.

Outside the lobby, a balcony overlooked the lush grounds with the water park-like pool and the Pacific just beyond. Twin towers, laid out in the now familiar Las Vegas three-wing design, flanked either side.

But McDonald’s take on the food situation wasn’t as kind. Apparently the Taco Shop across the street is seeing a lot of new business as guests turn away from the high prices Disney is charging at the resort.

LaughingPlace.com reader Retlawfan reported from his days at the resort during its grand opening. Plenty of kinks still need to be worked out of the technical system, and a few Disney customer service lessons still haven’t sunk into the new cast. Retlawfan was also directed to the Taco Shop for some cheaper eats.

Hawaiian travel blogger Jeanne Cooper writes about how the area of Ko Olina has seen a bit of a ‘Disneyfication’ since Aulani was announced and lists some nearby attractions that those staying in the area might want to see.

Finally, look to see Aulani featured as the vacation destination for one of Extreme Makeover: Home Edition’s deserving families in this upcoming season.