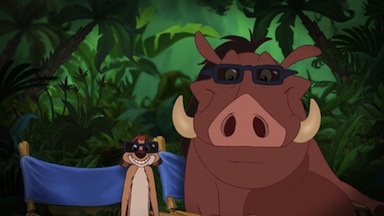 #2 PRIDE ROCK WAS CREATED IN BURBANK!

“We took a trip to Kenya to research the animals and the landscape for the movie,” explains The Lion King co-director Roger Allers. “There wasn’t much time for sketching during the trip because the animals were always very quick, but we did a lot of photo research and we absorbed the feel of the landscape and the weather. In the movie, Pride Lands is modeled after many different areas of Kenya. There are certain things lifted from the landscape around the Samburu District, but we used a variety of inspirations. Many people try to say, “Pride Rock is based on this mountain here.” But they are wrong. An artist in Burbank invented Pride Rock.

#3 ZAZU WAS ORIGINALLY A SMALLER SPECIES OF BIRD

“In the early stages of development, Zazu was a little, pointy-beaked bird,” reveals co-director Roger Allers. “I can’t remember the exact species, but we decided to change him into something very different after our research trip to Africa. We kept seeing these wonderful hornbill birds hopping around the place and they had so much character. The upward curve of their beak suggested a sense of haughtiness to them; and at the same time they had wonderful feathery legs that looked like they were wearing pajama bottoms. They looked so funny and they had so much personality that we knew Zazu would have to be a hornbill. It really added to his character.”

#4 IT TOOK NINE MONTHS TO CONVERT THE MOVIE INTO 3D

“When I first heard that The Lion King was going to be converted into 3D, I wasn’t sure it could be done,” reveals producer Don Hahn. “However, I was blown away by the results. It looks fantastic! All in all, it took about nine months to complete the process. We spent the first three months preparing and testing the shots, followed by six months of actual production work.”

“When Walt Disney worked on Bambi, he brought a variety of forest animals into the animation studio for research,” reveals The Lion King co-director Rob Minkoff. “The artists could see how the animals looked up close and they could observe how they moved around, so it was a great way to study the wildlife. That inspired us to bring real lions and cubs into the studio to research the animals of The Lion King. A very famous animal expert called Jim Fowler, who was the host of a television show called Mutual Of Omaha’s Wild Kingdom, brought the animals in for us. It was very exciting and very informative for all of the animators working on the movie.”

“In the early stages of production, the character of Rafiki was very different to the character you see in the finished film,” admits co-director Roger Allers. “In early versions of the story, Rafiki was a serious counselor to the king. He was a very wise man, so we hired the actor Robert Guillaume to do the voice. However, by the time Robert came into record the voice, the character had completely changed. We had come up with the idea of Rafiki being more of a crazy hermit monk. He was now a wacky and mysterious character with a mystical side and a wisdom that shows through occasionally – but a very playful, nutty side too. Robert is a very dignified person and this wasn’t what he had signed up for, so we spent the first recording session trying to find the voice and the laugh of Rafiki. Robert nailed it that day and the rest is history.”

“The casting process for The Lion King was extremely long and very involved,” explains co-director Rob Minkoff. “We went through lots of different ideas for the various roles in the movie, but two of the great successes were Timon and Pumbaa. Nathan Lane and Ernie Sabella were performing in a Broadway production of Guys And Dolls in 1992, when The Lion King was being made. They came to an audition in New York and they bumped into each other in the lobby, which is when they discovered they were both auditioning for the roles of hyenas. They asked the casting director if they could audition together and they were hilarious as they read their lines, but they didn’t seem right for the hyenas. That’s when we thought, ‘What if we use them as Timon and Pumbaa?’ It was the perfect fit.”

#8 THE HAKUNA MATATA SONG WASN’T IN THE ORIGINAL SCRIPT

“In the early stages of production, we had a song called He’s Got It All Worked Out in the movie,” reveals co-director Rob Minkoff. “We wanted a fun, bug-eating song because we wanted to convey the idea that Simba is not being a lion when he meets Timon and Pumbaa; he’s giving up his lion ways and he’s moving into this new life away from his home. However, we couldn’t convince everybody that making the entire song about eating bugs was a good idea. Soon after, the research team came back from their trip to Africa with the phrase ‘Hakuna Matata’. We talked about it in a meeting with Tim Rice – and that’s when the idea struck. I remember Tim saying, ‘Hmmm… Hakuna Matata. It’s a bit like Bibbidi-bobbidi-boo.’ A song was born!”

“My wife was pregnant with our first child during the time I was working on The Lion King,” explains animator Tony Bancroft. “If you watch a pregnant woman –– you’ll notice that they like to rub their bellies. It makes them feel comfortable. It’s appeasing. Well, I used to watch my wife rubbing her belly and it made me think, ‘That would be such a fun element to put into Pumbaa since he’s a big, fat guy.’ When you see Pumbaa lying on his back staring up at the stars in the movie, you’ll notice he does that gesture. I animated that scene and I had him stroking his stomach softly like a pregnant woman because it seemed so natural. It makes him more human and relatable.”

“We had a really tough time finding the right voices for the hyenas in the movie,” reveals co-director Rob Minkoff. “Gary Trousdale, one of the directors of Beauty And The Beast, helped us out in the early stages of development and he created an entire storyboard of the hyenas as if they were played by Cheech and Chong. It was hilarious, but Cheech and Chong weren’t working together at the time, so we knew we wouldn’t be able to book the pair for the roles. Around that same time we heard that Whoopi Goldberg was interested in the film and when we asked her if she’d like to voice a hyena she said, ‘Yeah, great.’ So we got Cheech and Whoopi instead of Cheech and Chong!”

Actually learned a thing or two from that list, how about you?