Hurricane Irene tracking away from Florida 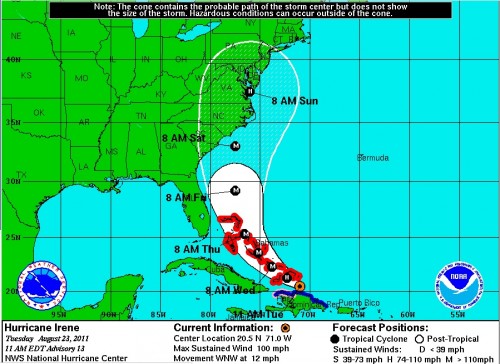 According to latest National Hurricane Center forecasts Hurricane Irene is tracking east away from Florida. This is likely the last update I’ll make, unless the storm tacks westward, in which case I’ll be back like a bad penny. Already, there are two more potential disturbances in the Atlantic and hurricane season is barely half-way through. The back-nine, as they say, is usually the roughest part of the season too. So keep an eye on the weather whenever you’re in town.

In the meantime, keep the people of the Bahamas in your thoughts. Irene is growing to be a powerful hurricane. After the Bahamas the next target is North Carolina or Virginia.

Previously: Keep an eye on Irene as it threatens Central Florida.

5 thoughts on “Hurricane Irene tracking away from Florida”