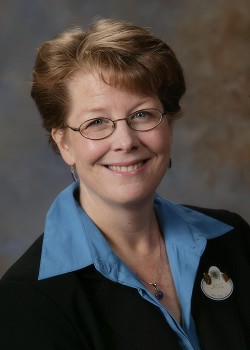 Dr. Jackie Ogden is the Walt Disney Parks and Resorts Vice President of Animals, Science and Environment. That means she’s in charge of all animation programs across the Disney parks and resorts. As such she plays an important role in the conservation, education, and awareness mission for the Walt Disney Company. So it’s great news to hear that Dr. Ogden as been elected to serve as the vice-chair of the Association of Zoos and Aquariums’ (AZA) board of directors.

Founded in 1924, the AZA is a nonprofit organization dedicated to the advancement of zoos and aquariums in the areas of conservation, education, science and recreation. “The AZA community recognizes Jackie Ogden’s strong leadership abilities,” said AZA President and CEO Jim Maddy. “Her extensive experience will greatly benefit AZA-accredited facilities and ultimately their care of animals.” Dr. Ogden will serve on the AZA board of directors as one of its four officers, each of whom also serves on the board’s executive committee. As vice-chair, she will be involved in every aspect of the national organization, including accreditation, ethics, animal welfare, and conservation.

“As a company, Disney has a long legacy of caring for the animals that share our planet,” said Dr. Ogden. “I am incredibly honored to serve in this role with the AZA and look forward to advancing the conservation, science and education mission of the nation’s 213 accredited zoos and aquariums.”

Dr. Ogden’s Disney career began in 1997 and she currently oversees the team of professionals who are responsible for inspiring millions of Disney guests, employees and business partners to conserve wildlife and the environment. Her scope includes animal care, health, education and science at Disney’s Animal Kingdom, Disney’s Animal Kingdom Lodge, The Seas with Nemo & Friends at Epcot, the Tri-Circle D Ranch, Castaway Cay, and soon, Aulani, a Disney Resort & Spa in Hawaii. She also leads the Agricultural and Water Sciences team, Environmental Integration and has responsibility for animal operations and environmental sustainability across Walt Disney Parks and Resorts.