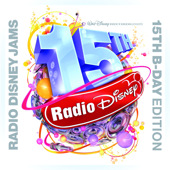 Radio Disney is now old enough that the kids who were listening at the beginning now have kids of their own. That’s some great longevity for a network that Disney was once willing to practically give away.

I remember when they had actual radio Disney DJs inside a booth in Disneyland’s Tomorrowland. I thought that was a great partnership (although the location sucked) and wonder why Disney hasn’t done more with Radio Disney at the parks.

From its inception in 1996, kid-driven and mom-approved Radio Disney has not only played hit songs, but also established superstars within the Disney family and beyond. This sensational new collection represents Radio Disney’s past and present, featuring industry legends as well as up-and-coming young artists.

1. “Not Your Birthday,” from the popular Hollywood Records band Allstar Weekend.
2. “Who Says,” the hit acoustic-flavored title track from Hollywood Records artist Selena Gomez & The Scene.
3. “Keeping Secrets,” from Kicking Daisies, winner of Radio Disney’s “N.B.T.” (Next Big Thing) 2010.
4. “Beautiful Soul,” the 2004 Top 15 hit from Hollywood Records solo artist Jesse McCartney.
5. “Wake Up,” the 2005 Top 30 hit from multi-platinum artist Hilary Duff, off her platinum-selling Most Wanted album.
6. “21st Century Girl,” the spirited, Top 10-charting title track from singer/actress Willow Smith’s 2011 album debut.
7. “Watch Me,” by Bella Thorne and Zendaya, a track from their hit original Disney Channel series, “Shake It Up.”
8. “Determinate,” from the chart-topping Lemonade Mouth soundtrack for the Disney Channel Original Movie.
9. “My Girl,” an irresistible track from Mindless Behavior, the new band that opened for Justin Bieber and will open for Janet Jackson later this year.
10. “Baby,” Justin Bieber’s Top 5 2010 breakthrough single from his multi-platinum debut album, My World 2.0, and a natural hit for Radio Disney.
11. “Waiting Outside the Lines,” an inspirational uptempo ballad by Greyson Chance, the tween YouTube phenom now signed to Ellen DeGeneres’s label.
12. “Tonight, Tonight,” Hot Chelle Rae’s quirky and witty single that was a top download on iTunes and a hit on Radio Disney.
13. “Baby One More Time,” the classic 1999 platinum hit single that started it all for Britney Spears, and an early Radio Disney favorite.
14. “All Day,” an upbeat love song from Cody Simpson, named Breakthrough Internet Sensation at the 2010 Breakthrough of the Year Awards.
15. “Young Forever,” the fast and furious Top 10 single from The Ready Set.

at Amazon or on iTunes.

Do you have any Radio Disney memories?