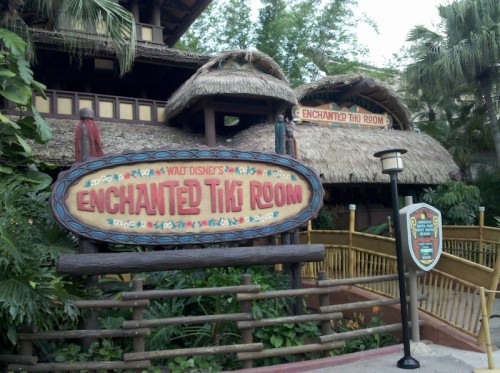 Disney has released a short video with Disney’s Imagineers talking about what the show means and what was involved in restoring it to the park:

The new show is a shortened version of the current Disneyland show, which itself is a shortened version of the original show. Not only is the Offenbach number gone, but so is the sing-along chorus of “Let’s All Sing Like The Birdies Sing” and the middle portion of the “Hawaiian War Chant” song. I understand the need to keep the show shorter for today’s audiences, for whom long form entertainment is a curiosity. But I’ll reserve judgement on how well it works until I see the show for myself.

The new Tiki Room clocks in at around 11 minutes now, which means the little birdies will be performing more shows everyday. That means it will be easier for Disney to meet their rides per capita goals, but also means that the show will likely play to less than full houses. So remember it’s likely that more people are seeing the show as it’s running more frequently.

Now that the park has restored this particular bit of its heritage, eyes are already turning to the opposite side of Main Street for the next target in need of an update. Yes, the Carousel of Progress needs an new treatment so that it no longer evokes the late 90s, and instead recaptures the original spirit of the attraction – to inspire future generations to build a new future.

Are you looking forward to seeing the Enchanted Tiki Room returned to the spirit of the original on your next visit?