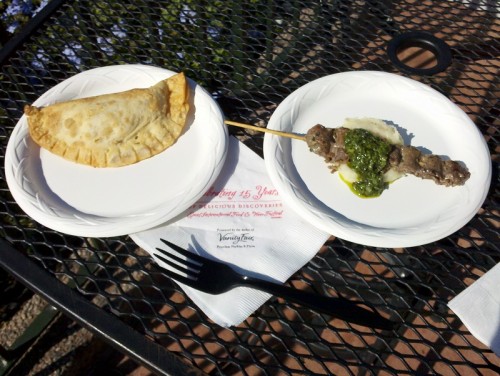 There’s a very nice profile of Disney’s changing food options on MSNBC.com. Apparently, they’re just catching on to the fact that it’s more than just hot dogs and hamburgers (although those were upgraded recently too).

“Disneyland and Walt Disney World have definitely expanded their range of culinary options, and now the different cuisines to choose from are global and varied,” says Cat Cora, whose restaurant Kouzzina opened at Disney’s Boardwalk in 2009.

Well, I wouldn’t go so far as to call Disney’s food selection Las Vegas like. No $1.99 shrimp cocktails here, not that wouldn’t be a bad idea. Come to think of it. We do get options like that at the Food & Wine festival. Food celebrities have become a growing part of the festival in recent years and this year will be no exception. Here’s a new video from Disney teasing the appearance of one celebrity chef:

For full coverage of everything food and wine festival related I recommend LaughingPlace.com and the Disney Food Blog.