Winnie the Pooh Perfect for Audiences Young and Old 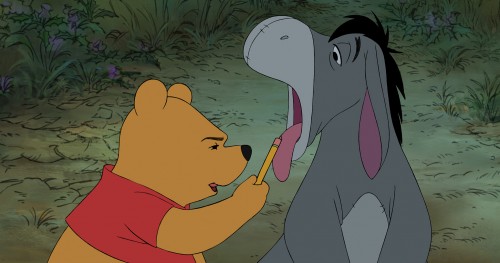 Based on the characters created by A. A. Milne and E. H. Shepard, Pooh is a straight up animated film for children that refreshingly doesn’t pretend to have some deeper subtext.

This is a story about a silly old bear’s quest to find a new tail for his neighbor Eeyore and rescue his friend Christopher Robin from a horrible creature known as a “Backson”. And the silly old bear absolutely LOVES honey.

While perfect for the youngest of audiences, there are more than enough quick-witted gags to keep older offspring and especially grown-ups genuinely entertained.

(Hint: Be sure to stay until the very end of the end credits. It’ll be worth it. Besides, the gorgeous live-photography element is something to talk about in and of itself.)

With a running time of only 69 minutes, timing is just about perfect throughout. My only moment of impatience came during an extended scene where Tigger tussles with a balloon. I am not a Tigger fan.

The artistry of the film’s animation is suitably matched by the wonderful voice acting.

Jim Cummings as Winnie and Bud Luckey as Eeyore (who has never sounded more mopey) stand out, but it’s The Late Late Show’s Craig Ferguson that’s most surprising in his role as Owl. He deserves an Annie Award for his transformational performance.

I’ve always said that Walt Disney Animation should focus on telling great stories through traditional animation and leave CG to Pixar. Pooh has only reinforced this belief.

By the way, does anybody have some honey I could borrow? Just a taste?