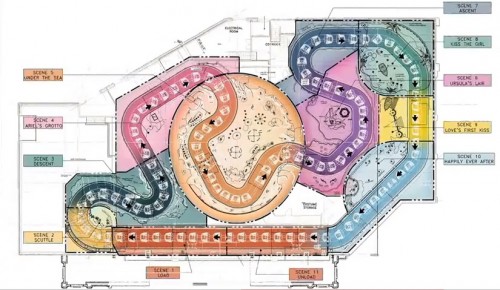 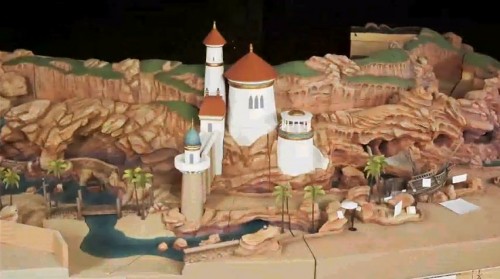 I really enjoyed the great shots of the model WDI is working off of to build the attraction’s facade and rock work. A meet and greet for Ariel is also housed in the same complex. The attraction is scheduled to open in 2013 (although they are hoping to finish in time for 2012 holiday season (I hope they do).

I am more than a bit disappointed in that it looks like the Magic Kingdom interior remains an exact clone of the already open California Adventure version that has been roundly criticized for lacking the crucial climatic Ursula fight scene.

But hey! It is a new high capacity attraction for Fantasyland, so let’s just be happy we finally got something to replace 20,000 Leagues Under The Sea…oh I get it, the name is a tribute to the old submarine attraction. That explains the difference between DCA’s name and the Magic Kingdoms.

A longer version of this video is being installed at Disney’s Hollywood Studio in the One Man’s Dream walk-through. I’ll be visiting soon, let us know if you’ve already seen it.

previousWhat Disney got Right, and Wrong, with the Disney Dream
nextMore details on the “Up House” in Herriman, Utah