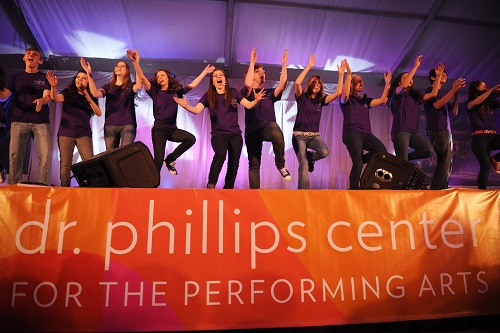 After some political struggles, and a delay after visitor tax revenues declined during the recession, the city of Orlando will finally be getting a world class center for the performing arts. To commemorate the start of construction on the Dr. Phillips Center for the Performing Arts, Walt Disney World President Meg Crofton joined community leaders during a ceremonial groundbreaking in downtown Orlando.

“The new performing arts center will enable our community to host world-class cultural offerings, support and educate our community’s artists, audiences and students and contribute to Central Florida’s overall quality of life,” said Crofton. “From the beginning, our goal has been to nurture a vibrant arts community and we’re pleased to have been a part of this important milestone event.”

Disney previously pledged $12.5 million to sponsor the largest of the center’s halls and has made Disney executives from across the company available to provide expertise.

Donations from Walt Disney World Resort and others in the community made the free, community-focused event possible. Entertainment was provided by internationally renowned singer and actor Davis Gaines, the Orlando Ballet and the Orlando Philharmonic Orchestra, among others.

The 2,700-seat theater sponsored by Disney is to be inspired by classic outdoor theaters, with renderings that show the blue side walls and ceiling simulating an evening sky. The major surfaces are expected to be adorned with cherry wood and woven copper. The design also references some of the most successful theaters by offering exceptional sightlines with tiered seating close to the stage. Amplified sound will be loud but clear with strong bass support, superb sound imaging and clearly understandable reinforcement for actors and singers.

When it is complete, the Dr. Phillips Center will include two grand performance theaters, a community theater, an outdoor plaza and performance space, rehearsal rooms, administrative offices and educational programming space. Opening the fall of 2014, its construction is expected to create 3,000 jobs for the greater Orlando region.