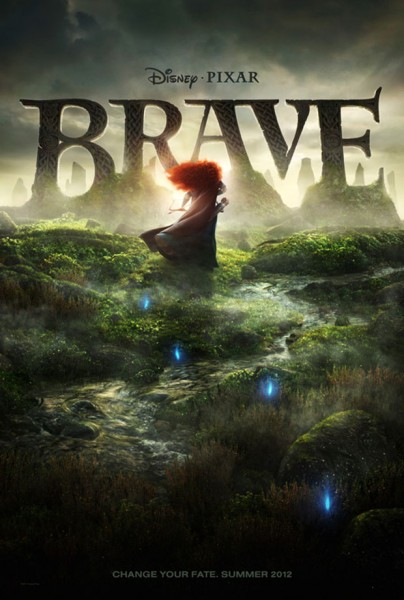 The teaser poster for Brave, Pixar’s next film after Cars 2, has been released. Brave will be Pixar’s first foray into fairy tales. It is set in the rugged and mysterious Highlands of Scotland and features a female protagonist (also a first for Pixar). “Brave” is the grand adventure of Merida (voice of Kelly Macdonald), a skilled archer who confronts tradition, destiny and the fiercest of beasts to discover the true meaning of courage. Directed by Mark Andrews and Brenda Chapman, and produced by Katherine Sarafian, the film also features the voices of Emma Thompson, Billy Connolly, Julie Walters, Kevin McKidd, Craig Ferguson and Robbie Coltrane.

Brave is set in the mystical Scottish Highlands, where Merida is the princess of a kingdom ruled by King Fergus and Queen Elinor. An unruly daughter and an accomplished archer, Merida one day defies a sacred custom of the land and inadvertently brings turmoil to the kingdom. In an attempt to set things right, Merida seeks out an eccentric old Wise Woman and is granted an ill-fated wish. Also figuring into Merida’s quest — and serving as comic relief — are the kingdom’s three lords: the enormous Lord MacGuffin, the surly Lord Macintosh, and the disagreeable Lord Dingwall.

If Pixar has shown anything, it’s that they can take a unique concept and make a story with heart and emotion. I have no doubt Brave will be cut from the same cloth.