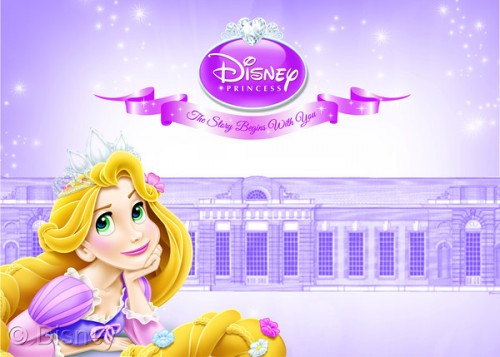 All this time I’ve been a Disney fan and I had no idea that there was an official ceremony for adding a princess to the Disney Princess Court. This October 2nd, for the first time an event called ‘Rapunzel’s royal celebration’ will take place at Kensington Palace in London, UK. Girls from across the globe & every Disney princess character will join the festivities. Well, I guess if Disney thinks it will sell more merchandise, then I’ll go along with it.

Disney will officially welcome Rapunzel as the 10th Disney Princess character at a high profile, star-studded celebration, to take place in front of a global audience on October 2, 2011. Little princesses from across the globe will watch Rapunzel be welcomed into the Disney Princess royal court by Ariel, Aurora, Belle, Cinderella, Jasmine, Mulan, Pocahontas, Snow White and Tiana.

In a world first, Kensington Palace, London, UK, was chosen by Disney as the perfect location for this magical welcoming ceremony of a Disney Princess, as it has been the home of many real life princesses over the centuries.

“Once Rapunzel becomes an official member of the Disney Princess court, she will be celebrated and recognized as such across Disney, and will be included in all Disney Princess products featuring multiple characters, in addition to her own merchandise line. Plus, across all Disney Parks, Rapunzel will for the first time wear her royal tiara, stolen from the kingdom by Flynn Rider in the Tangled.” said Mary Beech, vice president of girls franchise development and marketing at Disney Consumer Products. “With London knowing a thing or two about bringing royal celebrations to a worldwide audience, it seemed only fitting for the city to become the stage for the celebration to welcome Rapunzel into our own Disney Princess royal court. We are inviting girls from across the globe to welcome each Disney Princess character to the Palace and celebrate with Rapunzel on her special day.”

Independent charity Historic Royal Palaces has joined with Disney to help stage the event, in a collaboration that aims to encourage children all over the world to explore the stories behind the real kings, queens, princes and princesses alongside Disney’s. “Our aim is to help everyone explore the stories of how monarchs and other royals have shaped society, in some of the greatest palaces ever built,” said Ruth Gill, Head of Interpretation at Historic Royal Palaces. “Kensington Palace has always been a place of spectacle, beauty and majesty, and home to many inspirational real-life Princesses. We are therefore delighted to celebrate our relationship with Disney by hosting this magical event that will welcome Rapunzel as the 10th member of the Disney Princess royal court.”

All ten Disney Princess characters will take part in the royal celebration and will be joined by VIPs, celebrities and little princesses from across the globe in festivities including a procession through Hyde Park, party activities and a welcoming ceremony.

Each Disney Princess character has a unique story that empowers girls to imagine and live their very own fairy tales. Rapunzel is a modern heroine — she may have lived her entire life locked inside a hidden tower but Rapunzel is no damsel in distress. The girl with 70 feet of glowing, magical hair is an energetic, inquisitive young lady who fills her days with art, books and imagination. She is full of curiosity about the outside world and can’t help but feel her true destiny lies outside of the lonely tower walls.

Kensington Palace has been a residence of the British Royal Family since the 17th century and is famed for its associations with Princesses. Princess Victoria (later Queen Victoria, Britain’s longest reigning monarch) was born at Kensington Palace on 24th May 1819 and was christened the following month in the Cupola Room. Her love for the palace ensured the renovations of the State Apartments in 1897 which were opened to the public on Queen Victoria’s 80th birthday. Today, parts of Kensington Palace continue to serve as residences for members of the Royal Family. The best known resident in recent years was Diana, Princess of Wales, who occupied apartments in the north-west part of the palace from 1981-1997.

5 thoughts on “Ceremony to add Rapunzel to Disney Princess Court”