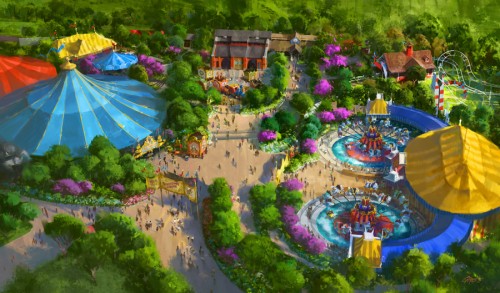 We’ve heard and seen a lot of what the main part of Magic Kingdom’s Fantasyland Expansion will entail (The Little Mermaid, Beast’s Castle, Snow White Dwarfs coaster, etc). But details for Storybook Circus has always been seen as a bit sketchy. Thankfully Disney released some new concept art today that sheds new light on the mini-land.

We know there’s a Three Little Pigs themed store and some sideshow thing to do with Peg Leg Pete. We know that Dumbo will feature two rings and a “next-gen” queue where guests can play while they wait for their turn on the ringer. Also we’ve known that the Great Goofini will be the new theme for the roller coaster. Throw in a water play area themed to Casey Jr, and that was it.

Looking at the new concept art it appears the land is a bit more compact. The scale still looks a bit off to me, however. But that’s the nature of concept art. The Casey Jr. water play area is moved closer to the train station from the center of the land and the new queue for the Great Goofini takes up the place where Donald’s boat used to be. However, the two big tent as laid out in this image don’t line up with the existing tents, so either the drawing is wrong or the tents left over from Toontown will be moved/replaced. Also, what’s that I see in the back of the land, looks like a carousel of some sort. Finally, much to my delight, it does appear that water is in the moat for the Duo Dumbo attraction.

Along with the concept art Disney reveals a bit of the backstory:

Storybook Circus will be based on our animated film, “Dumbo.” Here, Casey Jr., the famous locomotive from the movie, has rolled into town and brought the grand Storybook Circus with him. The area will be filled with colorful circus tents and nods to the famous film. For example, guests – especially little ones – are welcome to cool down with Casey Jr., who can be found near the train station, getting splashed by playful circus animals.

Are you ready for Casey Jr. to come to town for an extended stay? Do you see anything in the concept art I’ve missed?